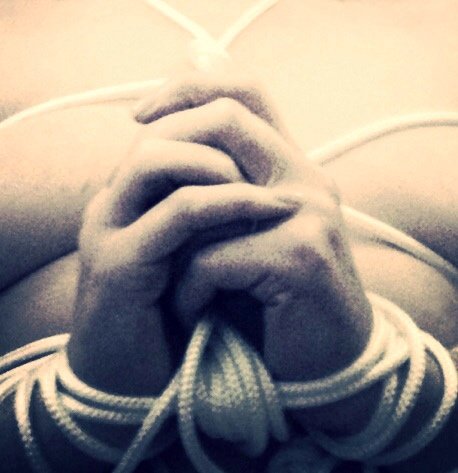 Bondage is an interesting topic for me to write about and it is not something I have written about much before. Synonymous with the image of BDSM, and yet it is probably one of my lesser kinks. Don’t get me wrong, I am happy to be tied, restrained, spread and splayed until I am completely at the mercy of HL, but I don’t think bondage as a kink on its own does it for me in the way that some other things do. That being said, there are things within this very broad area which do have a more specific appeal.

This discovery did not come to me immediately and I think there are a couple of reasons for that. The first is that our journey has meant that we have gone much deeper into the exploration of our own desires and learnt more about the things that work best for us. The second is that time has meant that some of the things that felt really exciting when we first tried them, have since lost some of their novelty value. This means that while much of the bondage we do still adds a layer to the experience, the bondage itself is not something that immediately flicks my switch.

That being said, I do enjoy the control aspect of bondage. If HL uses it to make me think about the fact that I am secured and vulnerable then it can really push me into a submissive mindset. Being completely secured can be an important reminder of the fact that I am his to do with as he pleases. This will happen, for example, if he uses the play bench where he can make me completely immobile with the use of a multitude of straps and fixings and will have me in exactly the position that he wants. This can be thrilling, however, that thrill often comes from the humiliation of being so completely exposed.

In the same sort of way, it is the impersonality of the bondage hood which gets me going more than the fact that I am unable to hear or see. It is the image of the slightly grotesque thing I have become, sitting imprinted on my mind’s eye that kicks things up a notch. It is not the things themselves, but the twist they give to my reality that makes them work. For me, it really all is in my mind, and the more that something feels forbidden, or freaky, or deviant, the hotter it will become. In that way, bondage can be a good tool for HL to work with, as it brings out something within him that he builds upon.

He is more visually stacked than me and enjoys the way that I look when bound. It empowers him and turns him on and I can feel the heat flowing from him, which, again, has an impact on me. It certainly brings out his Dominance and the submissive in me responds well to that, becoming what he sees. In that sense, certain things become symbolic of the reaction they get and the part they usually play.  Meaning becomes attached to certain objects in a way which adds to them, for example, our play cuffs. A different set of cuffs might not work quite the same, because it is not the wearing of the cuffs themselves, but what they have come to represent within our relationship.

It took a while to realise how I felt because when we became more adventurous about kink, we tried lots of new things and they all felt exciting. Everything gave me that feeling of being forbidden or freaky or deviant, so initially my response to some things was much stronger than it is now. Over time, the realisation of what leads to those sorts of responses has become clearer. I imagine most people go through that period of wondering why some of the things that used to work so well seem to be losing their effect. And from all the things you have tried, the ones that trigger the best response in you become clear.

For me, mental bondage can be as effective as the physical sort. Being told to keep still if I know there are repercussions in place can work really well and will tap into my fear of failure and make me desperate to please, even when failure is inevitable. It will force me to give up control, admitting defeat and become what he has driven me to be. Done in the right way, this will push my emotional buttons, tapping into the masochistic part who ultimately is loved and desired so despite my flaws having been acknowledged.

This is not to say that I am no longer interested in exploring bondage, as new experiences always entice me. Recently HL has fitted a restraint point to the ceiling of our bedroom and this is something that I am sure we will explore fully in the coming months. I am interested in suspension bondage and having watched it done a few times now, wonder about the effect it might have on me. So while bondage is something I am saying isn’t always a sure thing, it is such a huge area, with so many possibilities that it is something we will keep exploring as we push out boundaries and limits and imaginations.

I have said before that my kink is being Dominated and being in a position where I surrender my submissive self. It is about breaking my will and bending me towards the will of someone stronger, more powerful, more complete.  So bondage, discipline, sadism and masochism are elements of the kinks we enjoy but without the Dominance and submission their effect is limited. I can be secured by all the chains and ropes in the dungeon, but at the end of the day he can send me crashing over the edge with a couple of words. And this is particularly neat considering we don’t have a dungeon!

Like Loading...
Posted in Play, Scenes and Kink, Projects, Tell Me About ..., Throwing Caution To The Window and tagged bondage, dominance, married submissive, mental bondage, submission.