Skip to content
Home » Blog » Submissive Journal » What makes a house a home?

When I saw the question Home – place or person?, I wanted to say person because the people there are really what makes a home. I have moved house a few times and I am always able to establish a sense of home in a new place fairly quickly and this says it isn’t about the building itself, but rather who is there as part of it. That said, there are things that I will always do to make a place my own and I like it to be homely and somewhere that is easy to relax in, so in some senses, the features and fittings are of importance.

When I thought about it further I concluded that I didn’t think really it was either person or place that made a house a home, it is the ethos, the feeling, the emotional sense of what it represents that makes a place a home. That makes it harder as it is so vague. It is also difficult to tell with a feeling as we all experience and process them differently. Essentially for me, I have always had a vision of what a home would feel like and have worked hard to create that for my family

When I found myself in the middle of a marital breakdown and separation, I had to redefine, recreate and rebuild what that really meant. Literally. My ex remained in the home that we had built, while I had to start from scratch in somewhere newer, smaller, less homely and just plain different. It was not what I wanted but it was where I found myself. I tried to be upbeat with the kids and that seemed to help. Warmth and humour always help in making people feel relaxed and so it turned out to be a good start.

I also worked hard at creating new memories, adding in new rituals and things that we did there to create a sense of structure and safety. I came to realise that the bricks and walls around you don’t really matter, it is far more about the people who are inside. But not just that, it is about they way those people make you feel, it is about security and acceptance and in more general terms, a sense of belonging. I had long had my own vision of what I wanted my home to be, and once on my own, was able to really make that happen and share what I wanted with those around me who mattered.

I suppose that I should have been a strong enough force to do that in the confines of a failing marriage but I just couldn’t, and that was one of my reasons for leaving in some senses. Not only was I not what I wanted to be, the place that we retreated to every day was not as I wanted it to be. It became unpredictable, frightening at times and uncomfortable at others. I was dealing with so much at that time, that I could not counteract the negatives which were going on. By moving away from the toxicity that I had been living in, somehow I felt able to breathe again.

Home is more than the cosy furnishings, the smell of a freshly baked cake and the welcoming atmosphere though. It is about the laughter, the sharing and the support that you find when you are there. It is about experiences and memories and that feeling that you can just shed your skin and be who you really are. No pretence, no judgement, just you and those around you. It is a feeling of safety, of security, of familiarity and that can exist even when the building around you has changed.

As much as it is about the people, they can come and go and change too. I have worked hard to create a home in each of the places I have lived as an adult, and the same was true when I met HL and we moved in together. We started again but I worked from the same blueprint, this time with the focus of blending together two different groups so that they all felt at home. It was more of a challenge as the people came and went and we worked from a pattern which ranged from 2, to 5 to 9, depending on the  time and the day of the week.

At the heart of it all was still that feeling though, that ethos and that vision that this would be a place where we all could relax. There is love, there is laughter, there is learning. There is acceptance and tolerance and understanding. There is an open door to anyone who needs or wants to use it and over time, we have had out share of others who came, and didn’t really leave. I think in a home where there is a large family that can happen more easily and, as a couple, HL and I have always felt that we had enough love to go around so have welcomed anyone else who seemed to be in need, for whatever reason, for a home at that time. 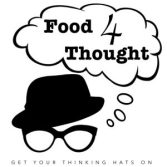 Click on the badge above to see who else is writing about home, or here to see more of my Food for Thought