It is that time again. Well actually it is four days into that time again but although my post is late, my submissive slant on advent is underway. Actually we weren’t sure we would do anything to mark advent this year. I think we swayed because we have done it for the last three years and were running out of steam. Also we seem to have been really busy this year. However, both of these are just the reasons that we should be doing this and making the effort for each other.  Christmas is about giving but so often we can overlook the little things we can give each other to smooth the way all the time, so have committed once again to a D/s Advent Calendar for 2019.

The Why and the What of our Calendar

The idea of the calendar came about because we had experienced a difficult year and I wasn’t able to do much for HL for Christmas in a monetary way. Actually these trials and tribulations continued much longer than anticipated and so the calendar continued, as it became a real positive in our year. We found ourselves referring back to some of the things we had done and using up some of the gifts which had not been spent at the time, for one reason or another.

I suppose it is made of the little things. It is not about big gifts and grand gestures but it make us make time for us as a couple at a time of year when our attention can end up being focussed on everyone and everything else. With a large family, it also means that we enter the Christmas period together and strong as a couple. I know that as a couple we should be doing these small things for each other all of the time and we are to some extent. But we have found that to make a concerted effort to focus during this time has been beneficial as well as being fun.

The first year I did a submissive advent calendar where I planned and gave ‘gifts’ to HL each day. This worked really well but was a lot of work ahead of time and the following year he wanted to be involved in the planning too. We took turn about that year but it didn’t work so well. I think that was partly due to the fact that he was working away a lot of the time but we sort of fizzled out with it. It was hard to co-ordinate and there was overlap too so the following year we planned the activities out together which seemed to go much better. Like the first year, if felt more manageable and we made it to the end.

It is hard to think up new things all of the time and after three years trying this in a variety of ways, most of our original ideas have been used already. We don’t see this as a problem really and if something is fun and enjoyable then it seems a good idea to incorporate it, so that is what we have done. We also need whatever we do to fit in with our lives, which sort of revolve around work, family and friends at this time of year so it had to be something that would not set us up for failure. This time HL has planned it out and I have decided to include the full list here, and then link back if and when I write a post.

So here goes for our D/s Advent Calendar 2019 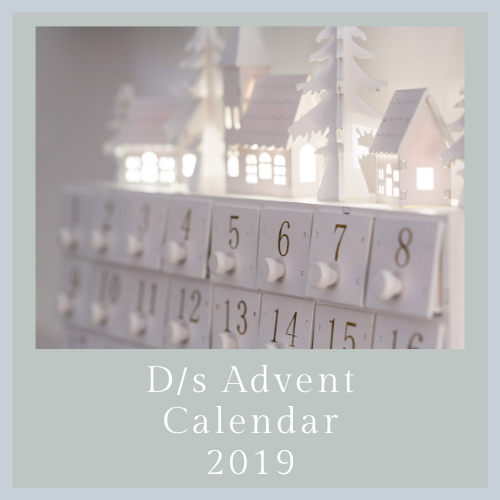