Y is for Yoni Balls
I can’t believe I am nearly at the end of this journey. I feel I have learnt so much, and yet, there is still so much out there for me to take on.  Today was about all things Y but the best part was the yoni balls. We were each given a set, and having tried them, and I decided to go with the larger egg. I wore it for the remainder of the lesson and then, after lunch, we were told we were going out!

I hadn’t left the school much since arriving, but today our task was to find something for a costume for tomorrow as we are going to celebrate reaching the end of the alphabet and the end of the course, with a Zodiac party.  And we were to wear the balls out, or rather, keep them in!  Being with May made the whole thing much more entertaining as we wove our way around the shopping centre looking for bits and bobs we could use, whilst also moving carefully so as not to let our secret slip.

I can really see how these things tone your muscles as I was clinging on to mine for dear life at points. The other thing they did was to give me a sense of submission while I was out amongst the general public. I imagined the reaction of some of them guessed my secret and we teased each other about them falling out and us being discovered. All of this made me feel wetter which then made it even more difficult to hold onto the ball! Knowing about our secret had me in a state of arousal for most of the day.

Wearing an egg, like wearing a plug, meant that the fact my body was not quite my own was at the forefront of my mind and focus, and was thrilling as well as feeling a little bit naughty. Wearing a skirt and no underwear added to this, but thankfully I managed to avoid dropping the ball during the trip, and was able to buy a nice set of ram horns for tomorrow whilst also avoiding any mishaps! As I write this entry, I am feeling a bit sad that tomorrow will be my last day here, but also excited that my journey is not over yet.

To catch up on other posts in this series please see April’s Submissive Training Journal. Or read last year’s letter Y post for the A to Z blogging challenge: Yes, Yours and Yellow 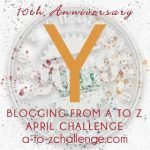 Like Loading...
Posted in A to Z Challenge 2019 and tagged A to Z challenge, ben waa balls, Fiction, Submissive training journal, yoni balls.