X is for Xylophone Mallets

I wasn’t sure where the letter X was going to take us but fortunately for me, it took me not only back onto the St Andrew’s Cross, but also to an improved understanding of the idea of pervertables, and an amazing experience with a set of xylophone mallets. Pervertables are commonly used household items which can be converted (or perverted) for kinky play.  We looked at a whole range of things and discussed the effect of knowing that something had an ulterior use.

A lot of the success of the power exchange seems to be about keeping the submissive in the correct headspace, so I saw the value of using everyday items and twisting them so that they meant something a little different. Down in the music room, I learnt exactly what the impact of that could feel like, when I was strapped to the cross and became a a sort of human xylophone. I had expected the mallets to have a bit of bite to them, but whether it was the music, or the adrenaline, they felt more like they had been designed for a sensual massage.

Dragon was providing the performance this time, and had selected an appropriate piece of music to accompany the play. He began lightly, moving the mallets up and down my body, which was secured tightly to the cross. He had allowed me to choose which way round I wanted to be, and although I had thought to face into the cross, I decided at the last minute to change, so that I could see what was going on. I was glad that I had made this choice as being able to see the reactions of my audience added to the experience for me.

It was also beautiful to be able to watch Dragon move so quickly with the sticks, and I could see them fall almost before I felt them. He worked from the outside in and up and down until my whole body was alive with the sensation. He had avoided my breasts much to being with, but now began to touch them lightly with the mallets, using them to knead around the outside of my breast, then striking the nipple. This is something I would have said I would not enjoy but the pleasure shot through me in response to his touch.

Realising the effect, he continued his assault on my nipples as I built closer to an orgasm. I closed my eyes as I became more lost in the feelings, and the whipping of my nipples seemed to connect them to my clit as if it also was being struck. Perhaps it was, I cannot be sure, but I know that soon I let go completely and pulled my wrists and ankles against the cuffs that bound me to the cross as my orgasm set each part alight, and burst out of me without warning.

To catch up on other posts in this series please see April’s Submissive Training Journal. Or read last year’s letter A post for the A to Z blogging challenge: X-Frame, X-Rated and Xylophone Mallets 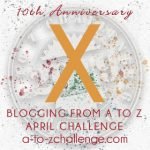