W is for The Wand
One of the toys that has not been used yet is the wand. We learnt that a wand is a personal massager and is one of the most popular toys amongst those engaging in BDSM play. I had used different vibrators before but nothing the size or the power of the wand so I was keen to try it out to see if it was as good as the rumours said. We got the opportunity today to do just that when the wand was used to demonstrate how to force orgasms. This also sounded unusual to me. I had only ever had one orgasm at a time and didn’t think that anyone would be able to force more than that from me, however, it turned out that I was wrong.

I was working with Quillon again and he had me secured to a play bench. He had warmed me up with some sensual touch so my body felt pretty alive. I was sceptical that I could go past the usual exhaustion and sensitivity which came post orgasm, but I was also relaxed and excited and prepared to see where any of this went. I was surprised when he first held the wand against me. It was deep and rumbly and seemed to penetrate my clit with its vibrations down into a depth that I hadn’t been aware of before.

He continued to play and tease my body with touch a little as he used the wand to build me up closer and closer to an orgasm. He could see I was close but told me I wasn’t allowed to come which made me even more desperate. I focussed on him and on what he had said and tried to prevent myself from falling over the edge of my pleasure.
“Do you want to come now?” he asked.
“Yes please,” I managed to squeeze out.
“I will allow it,” he said in a deep voice, “but be aware that once you have come, I will not stop. I will continue to take your orgasms from you as and when I wish.”

I assured him as well as I could that I still wanted to come and sure enough, he drew me to the edge and over, as a huge orgasm crashed through me. Immediately it had burst, I become so super sensitive that I wriggled and screamed and writhed about in on the bench, trying to get away from the buzz of the wand. He didn’t let up, however, I think that he did reduce the sensation a bit as I was able just to bear it by detaching myself slightly from my body. It wasn’t easy and it felt like noise through my body, a pleasure pain of over stimulation.

I fought it for a while, dipping in and out of being present in the feeling and trying to disassociate to cope and then I felt a welling up, like liquid pleasure building inside me. He must have known somehow as he told me I was a good girl and reminded me that my orgasms were his and that he would have this one from me so I would be as well to accept that. It built up really quickly from them, rumbling through me from the inside out as I came for him again.

Again he continued to hold the wand to me and I noticed him smile. He was enjoying my undoing and the look on his face helped me to slip deeper into it for him. Again, I tried to removed myself a little to endure the scream of my swollen clit and once again, he was able to build me back up, drawing the pleasure crashing and shaking from within me. I could feel myself starting to drift as the fight within me left and I became more malleable for him, my body dancing and responding to him, almost separately to me. I felt almost outside myself, observing, and just when I thought I would drift off, the intensity increased and I was right back there with him.

Orgasm after orgasm he took and I really have no idea how many of for how long this pattern continued. I do know that with each, I felt that must be the last, but he seemed more aware of the ability of my body to perform to his will than I was. I could feel my limbs becoming heavy, as if they were not my own, and I started to drift further away from myself than I had been. All I wanted was to lie there forever, to be part of him and to remain in that moment where nothing else mattered.

Click here to read about our own forced orgasm scene or here to read Story of the O – #2 Forced Orgasms or you may wish to read a review of The Doxy wand.

To catch up on other posts in this series please see April’s Submissive Training Journal. Or read last year’s letter W post for the A to Z blogging challenge: Warrior Princess, Want and Wand 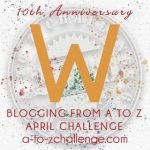 Like Loading...
Posted in A to Z Challenge 2019 and tagged A to Z challenge, Fiction, forced orgasms, Submissive training journal, wand.