U is for Unexpected
This entire experience really has allowed me to be more open to the unexpected. I realise how much I have held myself back in the past by needing to know the outcome and the direction of things. It is hard to trust that things will be ok without my explicit control, but becoming submissive has shown me that ultimately, I have been denying myself things by not being open to them. We talked a lot about this today and everyone seemed to feel the same. Unexpected pleasures, unexpected twists and turns, unexpected parts of themselves which suddenly come to the surface. Not to fear the unexpected but to embrace and go with it, is something that has come out of this for me.

What happened next was unexpected and we were told that it would be. We had each been given an experience based on the teachers’ observations of us, and of what we had written and communicated with them so far on the course. We received a small white envelope with something individual for each of us. I felt nervous as I opened my envelope, and even more so once I had. Inside it was a small piece of paper which read:
You have been selected for sexual testing. Report to lab 2 at 5pm today so that experimentation can commence.

I am sure that I gulped out loud and my whole body flooded with adrenaline, but I was excited too in a sexual way and I felt myself shiver with a little thrill of what this might mean. I reported to the door marked Lab 2 at the appropriate time, not knowing quite what to expect. I knocked and was invited in. The room was brightly lit and in the centre was a table which was surrounded by a set of trolleys bearing a range of toys and implements, some of which I had not seen before. There was a man dressed in a lab coat who told me to come in.

He asked me to lie on the table and explained that he was going to perform some sexual experiments to determine my arousal levels to different forms and intensities of stimulation. He told me that while the purpose of these experiments was to push past my natural boundaries, I would not come to any harm and that nothing he was going to do was dangerous in a physical sense. With this, he fastened my wrists and ankles to restraints which I now noticed, were part of the table. Lifting each ankle, he was able to raise it up above me as the cuff was attached to a pole which slid up and then locked in place.

The helplessness and exposure would have been terrifying, had this scenario not been part of a fantasy I had contemplated for a while. As it was, I was anxious but also highly aroused at the whole situation. Once my legs were in place, he slid the lower section of the table out and placed it to one side, moving into the space that it had left. He reached onto one of the trolleys and picked up a pair of surgical gloves which he put on, applying lube to the index finger of one of them.
“Ok, let’s get started,” he said.

He rubbed the lube onto me a bit before pushing his finger inside just a little. “As I thought. Already quite wet.” he commented, as if to himself. I remained quiet. He then took a long probe looking thing and inserted it into me, explaining that it would register the responses that I had. I noted that two wires came from it, attached to a monitor which I was unable to see from where I lay. I twitched in response and noticed that he looked at the screen and nodded. Having the thing inside me was making this so much worse. It was enough to remind me of its presence but didn’t have the thickness or depth that my body was crying out for.

Next he took a little disc from off the other table and set it onto my clit. He pressed a control and it started to buzz on me. I pushed my body into it as much as I could but it wasn’t enough and I could see from his face that he knew that. He turned it up and up so that I writhed and twisted as much as I could with my arms and legs fastened as they were. I felt the orgasm building within me and he watched as I got closer and closer, turning the screen so that he could see it better. He seemed to control the pulse to keep me right on the edge, reducing and increasing so that the release never quite came.

With the disc still attached and the probe still inserted, he reached towards my upper body and attached a suction cup to each nipple. These were also attached to a control somewhere and as he switched them on my nipples pulsed and grew and felt they might explode. Each time I got used to the pressure, he would increase it and the sensation, combined with the buzzing on my clit was becoming too much to bear. I began to cry out and writhe around, begging for release, but he continued to watch the screen in a detached way, adjusting the power accordingly.

When I thought I could take no more, I felt the pressure reduce and the suction cups were lifted off, to reveal my swollen, engorged nipples. I was shocked to see how they looked and when I saw him select a set of clamps, I wasn’t sure how much longer I could continue with this. He must have noticed as he told me I was doing well and that my nipples were far more responsive than those of previous subjects. He said he would need a larger clamp than he had planned, but he thought it would work just as well.

My face flushed at his words and I felt myself become even wetter as a little moisture trickled down towards my bum. I clenched to try to keep it in and he he took a tissue and wiped me in response.
“God you are soaking.” he said.
I heard myself moan a little and whimper. Words seemed unnecessary, as when he spoke it was as if to himself and not to me. Clamps now attached he returned his attention to my nipples and began to pull them upwards with a small chain which was part of them. They stretched and grew, becoming more and more elongated before my eyes, and the pain mixed with the humiliation and the pleasure, and had me back to rocking on my orgasm again.

He took a measure and measured the length recording something on the pad beside him. He must have been satisfied as he released the chains and removed the clamps, and I cried out as the blood rushed back into them. He went back to the first trolley and selected a dildo which he slid into me, next to the probe. The feeling of fullness, the buzzing on my clit and the burning of my nipples meant that I clenched down hard on it, and I saw his face light up as he registered the readings from the probe on his screen.
“You are doing well so far, and I have some interesting results. Just one more and we are done for the day,” he said with a smile.

Again and again it seemed to come, rolling on and on as I tipped on the edge, never dropping back but never pushing over completely. It rippled through me, and over me, and within me. It exhausted me and I wanted it never to end but wondered if I could take anymore. I seemed to be suspended in time, at his mercy completely, as he controlled my body, making it jump and dance and perform for him. I have no idea how long I was like that, orgasming over and over again, but at some point it must have stopped for when I came to, I realised that, although my body still buzzed and peaked, all equipment had been removed and packed away.

I can’t say that I am completely sure what happened to me today, but it was definitely unexpected and I am not sure that anything I will ever experience, can quite beat the feelings that I experienced in that lab.

To catch up on other posts in this series please see April’s Submissive Training Journal. Or read last year’s letter U post for the A to Z blogging challenge: Understanding, Unique and being Used 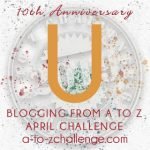