We learnt that electro sex toys can be used to transmit an electrical signal that can stimulate certain areas of your body, a bit like the stimulation used for muscular pain relief. Applied to the intimate areas of your body, this can be highly arousing. The power is increased gradually and they can range from creating a mild tingling sensation to making your muscles clench and twitch. The more I heard, the more appealing it sounded, which was fortunate as we were going to get to try it out.

I was working with Master C this time and he asked me to lie face down on the bench, making sure that I was comfortable before he began. I was feeling pretty tense as he placed the pads, one on each bum cheek, and switched them on. Although I was prepared for the shock, initially I couldn’t feel anything. Sure enough, after a while, my skin began to tingle in a quite delicious way. It felt like a little buzz somewhere under the skin, as if i was being touched by millions of tiny little fingers.

I felt my skin jump slightly as it went up a notch, and then I adjusted and relaxed into the sensation again. I loved the way that it made me feel, as if my bum was alive with all the tiny sparking feelings. Master C asked if I would take a little more for him, and I agreed willingly. This time, it was much stronger and it took me longer to let me muscles relax back down. My body started to feel heavy and almost as if it wasn’t part of me as everything became about the sensation I could feel.

The next time I felt it go up a level, my cheeks tensed and twitched and I pushed myself into the bench, which only seemed to heighten the arousal I felt, and transfer the feelings throughout me. I felt as if I was spread open now that the intensity was higher and that made me feel even more desperate than I had before.
“Hold still,” I heard Master C say as a cold trickle of what I thought was lube dripped over me, running down the crack of my bum. “I think you will enjoy this, but I need you bear down a little to take it.”
I felt something press on my opening and then, with a pop, it seemed to be inside me.

I was no longer in control in any way of any part of myself and felt alive with the heat and the pulse from inside me. My body was no longer my own and I didn’t care at all, I just wanted more and more of the way I felt. I am not sure how long I lasted like this or how far he took the little dial but I was lost to everything but what I was feeling in the here and now. I could feel my orgasm building and whether or not I had permission to come, there was no way I was able to stop it. It built up and up and exploded through me, leaving me limp and exhausted inside the noise of the stimulation to my bod, as I drifted away.

To catch up on other posts in this series please see April’s Submissive Training Journal. Or read last year’s letter T post for the A to Z blogging challenge: Trust, Transition and Training

The following post are about our own experience with electoplay: Electro-play, Together in Electric Dreams and New Year Fireworks.

The featured image is of the ElectraStim Flick Duo EM80-M Stimulation Multi-Pack which is what we have. 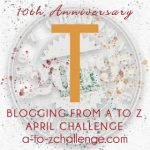 Like Loading...
Posted in A to Z Challenge 2019 and tagged A to Z challenge, electroplay, electrostim, Fiction, Submissive training journal, tens.