S is for Sensory
One of the key things that I have taken away today is the need to slow down, to switch my brain off from all distractions, and to use my senses as a way of experiencing sexual pleasure. What we have been talking about is experiencing every tiny sensation, every flutter and whisper, as something erotic. I can see that this makes sense for me and is likely one of the things I have done wrong in the past, choosing to conjure up thoughts in my own head as a way of feeling aroused. So to be able to look at shifting perspective somewhat, is a really positive step for me.

I was pleased to learn that we were going to get to put the theory into practice as I wanted to do that while it was all still fresh in my mind. So, along with the others, I put on one of the eye masks which had been left for us, and I waited. I could hear steps and feel the movement as people came and went and it wasn’t long before I felt a hand on my arm. I looked to where I thought it came from, but of course I couldn’t see anything, although I felt myself being slowly and gently led along the corridor and into another room.

I expected the person to speak to me, but instead, I had a set of headphones placed on my head and the world filled with music. I was then manoeuvred back so that I was laying down on something soft. I felt a thrill at the unknown and the unexpected. I felt vulnerable but also found the music and the softness relaxing. My eyes were closed behind the mask and I felt as if I were floating somehow on something warm. There was a sense of anticipation as I waited for something to happen. It felt as if there was someone there but the feeling was hardly discernible.

I focussed to pinpoint it and it came again, like a wave of something across me. It became stronger and seemed to lick across my skin, so gently, waking me up inch by inch. Again and again it washed over me, doubling back on itself as it weaved and worked its way across my body. Everything felt heightened as I waited for it to touch me again. And there, on my nipples and off again, down to tease at the inner thighs and rest between my legs before moving off again. I had no idea what it was. It felt a little like static which creates a field around it and was pulling me in.

I felt fingers now, which wrote on my body, beautiful words and phrases as I rose and fell with the rhythm of them. Touching me more eagerly than before, making me ache and long for something more, something firmer, like a thirst which can’t be quenched. Next I felt my legs being opened and my arms placed in an outstretched position. They were fastened somehow and although I strained against whatever it was that held me, I was trapped. I felt a flush of fear then about what might happen next but it was quickly pushed away by the pleasure of the stroking fingers.

It seemed the touch was all over me and I became lost in the waves of pleasure that were created. The sensations continued, building up and up in intensity and in pressure. As they moved from the warmth of pleasure, to the slice of pain, I could barely discern the difference. My body responded and moved with the flow of the feelings and the beat of the music which filled my ears. There was warmth and cold and both sought to fuel the fire that burnt inside me. I was glad I was secured as I pulled and moved against my bonds as the need within me grew.

I felt as if I was drifting in a place that was nothing but the sensation I became. I became the pleasure and the pain, the fire and ice, and the want and desire and need. I became so I didn’t care about anything more than what I was in that actual moment and I knew that I never wanted it to end. And when it did, I drifted still, buzzing from the current that ran through me.

Some other posts where I have written about sensation play are:
Sensational
Sensory Scene
Sensory Deprivation

To catch up on other posts in this series please see April’s Submissive Training Journal. Or read last year’s letter S post for the A to Z blogging challenge: Submission, Spanking and Safety 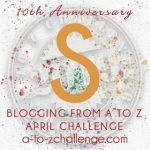