R is for Roleplay
Today, one of the things that we talked a lot about was roleplay. I am not much of an actor but we watched a few demonstrations this morning and it has made me change my mind a bit. I am able to see now that if I can find a role which fits a little with the way I see myself, then it is something I might be able to do more easily. I can also see that it would be a good way of experimenting with some of the things that you may struggle to do usually, by using roleplay to allow your partner to push your boundaries.

We were asked to work in groups to think about the roles which might work best for us. For me, I thought that the ones that would be most successful would be the ones where my vulnerability was heightened and also ones where there was some humiliation. I have realised since being here that these are some of the things turn me on anyway, so I think it would be easier for me to overcome my nerves and my inhibitions and just let go. I think that a passive role work work better too as I enjoy following instructions and being directed.

Once we had discussed things in the group, we were asked to write out a roleplay scenario that we would like to try. At first I thought I wouldn’t be able to write anything and I was a bit put off by so many of the others scribbling away. I felt embarrassed initially, but in the end decided just to go for it. This is the scenario that I wrote down.

The Scientist and the subject
I am a helpless victim in a scientific experiment. I am being held by a mad sexual scientist who has me tied to his examining table, deep in the heart of his laboratory. He tells me that he is going to perform a series of experiments on me in order to test my responses. He has a range of tools set up on a table beside him and says that he will use them to stimulate me while he watches and records the reactions of my body. He explains that he is covering new ground and so it will be about pushing and going beyond the body’s natural boundaries and discovering what happens.

I have linked a few of my posts involving roleplay here:
Roleplay
Playing Roles
Schoolgirl Scene
Welcome to my workshop, little doll

To catch up on other posts in this series please see April’s Submissive Training Journal
Or read last year’s letter R post for the A to Z blogging challenge: Rules, Resets and Roleplay 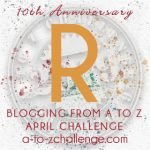 Like Loading...
Posted in A to Z Challenge 2019 and tagged A to Z challenge, Fiction, roleplay, Submissive training journal, the scientist.