Q is for Questions

The content of our learning was a little different today. We were not in class as usual and the lesson was not delivered by the teachers. They told us that they had arranged for us to speak with submissives who were currently in D/s relationships so that we could ask some questions on a more informal level. I was pretty excited about this as it seemed such a great opportunity. We were introduced to the submissives initially, and then could ask any of them any questions we wanted.

I was really pleased that Aster was there as I had already met her during the dungeon visit and felt comfortable in her company, but there were also subs who were in different sorts of dynamics, including ones which were more focussed around play and those who didn’t have a regular partner, and well as those in lifestyle type relationships. I was pleased to see a couple of male subs too and I noticed that August spent most of the time with them.

I felt like I had loads of questions, but at the same time wasn’t sure where to start. One thing that I did want to know was about the way the dancing had made me feel. I had got so lost in it and experienced a high after that felt a bit confusing so I wanted to know if that was a one off or if it was something that could happen sometimes. We had learnt about endorphins of course, but I had thought that they were more related to the body’s response to pain than to anything else. I felt a bit awkward as it was not the sort of question I could hear others asking, so I went to Aster as I felt most comfortable with her.

She asked me to recount what had happened and how I felt and said that it was possible to experience those similar feelings from things other than impact play. She explained that the adrenaline I felt from my nerves and anxiety about being pushed beyond where I was comfortable could cause the same sort of chemicals to be produced which would result in the feelings I had. She also explained that when there was a feeling of deep emotional connection to the Dominant that it could also have the same sort of effect.

I felt better about that as I had been baffled about it when it happened at the time. I had not expected to become so involved and so aroused. I also chatted to her about what it was like living in a D/s dynamic all of the time. I had only been here for just under three weeks, but was pretty sure it was what I wanted. I wondered how it worked with real life too so it was a great opportunity to be able to find out how it worked for Aster and for Master C.  I was surprised to learn that they had a family, also that she worked part-time.

This was really encouraging for me as I knew that there were other things in life I wanted apart from this and the image I had before coming to the school was not one that would have fitted with the life I had currently. I became more convinced that this was something that would be sustainable for me and that I could explore, were I to find a Dominant who was interested. I also learnt a lot listening to the questions that others were asking, things which I would not have thought about myself, but which were just as relevant to me.

It was a good session today and I am more convinced than ever that submission is a deep part of me and something that I want to explore further when the course has ended.

To catch up on other posts in this series please see April’s Submissive Training Journal
Or read last year’s letter Q post for the A to Z blogging challenge: Questions, keeping Quiet and Quickies

Alternatively, the post Submissive Questions explains some of the questions I ask myself on a regular basis, in order to support our communication and my own behaviour and actions. 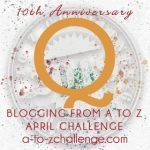 Like Loading...
Posted in A to Z Challenge 2019 and tagged 24/7 D/s, A to Z challenge, Fiction, lifestyle submissive, questions, Submissive training journal.