O is for Objectification

Really, yesterday was excellent preparation for today, and I found that it helped to have some previous experience to draw on for what took place today. I was able to connect more easily with the discussion about objectification and the different forms that it could take. I wasn’t sure that being used as a serving platter had pushed me into quite the headspace that it had for some, but it had made me feel alien to myself somehow, and I imagined that was something that could be built upon.

As it happens, I was right. Today’s practical introduced me to the topic of inspections. Apparently an inspection is something that a Dominant may do in order to makes sure that ‘their property’ is in good working order. Even the thought of this turned me on a little so I figured it might be something I would enjoy. We were each given a sheet with the specific requirements, and were given time to prepare according to the instructions provided. This covered areas of personal grooming as well as care to presentation with requirements for nails and scent etc. As I luxuriated in the bath and prepared to get ready, I was already feeling aroused at the thought of such intimacy.

I suppose I had expected the activity to be one to one, but when I got into the room, I realised that it was to be observed too. My sheet had requested that I adopt the inspect position, which it said required me to stand, legs open wide, hands behind neck, chest out and eyes on Dominant. I had practised a little in the mirror before coming down, which I was glad of now as my nerves took over. I got myself into position, trying to ignore the others looking on and focussed on my Dominant. It was Mistress Valentina, and once I had made eye contact, she proceeded to walk slowly around me.

I kept my eyes straight ahead, although the temptation was to follow her. When she was satisfied she had looked at me long enough, she ran her hands from my neck, across my shoulders and down my arms. She lifted each hand and checked that my nails were painted as per her request.  She then returned her hands to my shoulders and ran them down the front of my body, stopping at my breasts. She cupped each one and then gave my nipples a little squeeze, before continuing her way down, towards my feet. Once there, she checked my toes in the same way she had my fingers, and made a note in a little book she had placed on the table beside her.

Her hands were cool and her touch was firm but gentle at the same time. I felt overwhelmed by the attention she was giving me but I also felt unconformable about my nakedness in this room of clothed people, and my uncertainly of what was to come. I felt myself detach a little in response. I was becoming aroused by her non-committal manner and I felt a bit like an exhibit, desperate to please whilst also being terrified I would disappoint. My anxiety and fear mixed with my excitement about what she was going to do and what those watching would think, and it made for a heady cocktail of contradictory feelings.

Next she told me to turn and face away from her. She ran her hands out across the top of my back this time, lifting my hands so that my arms were above my head and she checked my underarms. She left my arms in this position while feeling her way down the rest of my body, giving my bum cheeks a squeeze each side as she went. I was definitely feeling like property. She stepped slightly away from me at this point and asked me to bend forward and touch my toes. I honestly thought I would explode and wanted the ground to open up. It was so humiliation and my only saving grace was the fact that I was facing away from everyone.

I felt open and vulnerable as I held position in silence, not knowing what anyone was thinking. Then, as if I wasn’t spread wide enough for all to see, she pulled my cheeks apart a bit so that I was completely exposed. She seemed to study me for a while, stroking me and touching with her finger before returning to note something in her pad. I let my mind wander to imagine what she could be writing and that only sought to add to my humiliation. To make it worse, I was now so turned on by the whole thing that I was swollen and wet. I really didn’t understand this or understand myself and felt that my body was betraying me somehow.

Next I was asked to lie on my back with my knees bent and my feet together. Pushing my knees apart so that my legs fell to the side, I was now back in full view again. Mistress Valentina then proceeded to check my grooming, before moving her finger along my outer lips. Once satisfied, she pulled them apart to reveal yet more. My face burned as she trailed her finger along my inner labia, stopping at my clit which she gave a firm press. It was as much as I could do not to shout out, I wanted to come so badly, but she stopped and went to note something down again. Presumably the twitching, pulsing, desperate mess that I had become.

When she returned to her place, she resumed her inspection, giving my clit a gentle squeeze. I was trying with all I had not to respond and push into her as I ached for release. She then lay one hand on my stomach and with her other hand she inserted first one, then two fingers inside me, using them to massage around me internally. I lay there fighting myself to keep still and allowing the feelings to wash over me. I worked hard to move past the pleasure of her touch and the feelings of shame that I felt about the way I was responding, so that I was in a place where I became more accepting and more compliant.

I distanced myself from my body somehow and in doing so was able to become more focussed on pleasing her and becoming the submissive I thought she wanted. By the time my inspection over she then asked me to kneel while she wrote up the final observations, and I felt I was able to do so with a confidence and poise that I hadn’t felt before. I no longer felt small and embarrassed and when she told me that her observations would be shared with me later on, the fear of what was written was replaced with an acceptance of it as a way to move forward and learn.

To catch up on other posts in this series please see April’s Submissive Training Journal
Or read last year’s letter O post for the A to Z blogging challenge: Orgasms, Oral and Openness

We quite often use an inspection at the start of a scene. The post, The New Hood – a peek inside , is one example of how this works for us.

Please click the badge to see who else is being deliciously wicked this Wednesday. 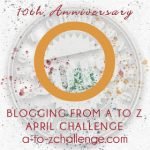