K is for Kinbaku
What we saw today is something that will never leave me, although I am not sure it will be something I ever get to experience myself. We were privileged to be able to learn about kinbaku, the Japanese art of rope bondage, from a Master who came to speak with us. I don’t think I was clear beforehand about the different types of rope bondage, so I am glad that I know now that this is an art form which is highly technical and should only be performed by those who are formally trained in it. Obviously there are other forms which would lend themselves to novices and people learning, but the complexity and intricacy of this form is now much clearer to me.

Kinbaku roughly translated means bound tightly, therefore it is essential that the tier is someone who knows what they are doing. It is not something to be rushed as it is a sensual experience where the one being tied drops into an almost meditative head-space as they become slowly more and more restricted. Not only is it wonderful to experience, it is also incredible to watch. I can only one day hope to experience how it feels myself, but luckily enough I was able to watch Master Haruki at work which was thrilling enough in itself.

Although I would gladly have offered as tribute, Master C had already asked May if she would be willing to be part of Master Haruki’s demonstration. As she walked up to him and knelt, I thought what a good choice she was because if she had any nerves or hesitation about it, she hid them will with her poise. He spoke with her quietly before they began and although I could not hear the words, I saw her nod in affirmation. I already found the process arousing and you could sense the connection beginning to form between the two.

He restricted her body first with his, before moving to use the rope. His hands moved quickly and confidently tying such complex knots, but also keeping contact with her skin. I could see May relaxing into him as she started to let go. Her body seemed to become more pliable, and she moved her head as if she was drifting away. Slowly and sensually, he bound her body tighter and in different ways, and it was as if she became an extension of him. Watching them, it was certainly art in its most erotic form. Despite not knowing one another previously, an intimacy and a connection had quickly formed which was almost tangible. We watched in awe as Master Haruki slowly bound her completely, mesmerising us all with the beauty and the sensuality of what he was doing.

Once the demonstration was over, we were quietly ushered into the other room in order to allow May some time to return to herself. I remembered becoming aware that everyone had left after the cane session and I realised it must have been a similar situation. I was surprised to discover how long the kinbaku session had taken from start to finish as it had been so completely absorbing that I had lost all track of time. Although Master Haruki remained with May, next door we were encouraged to ask any questions we had of Master C so that he could pass them on; I was excited to learn that Master Haruki was to be a guest here for a few more days and hoped that I might experience more of his art.

To catch up on other posts in this series please see April’s Submissive Training Journal
Or read last year’s letter K post for the A to Z blogging challenge: Kink, Kids and Kneeling 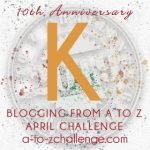 Like Loading...
Posted in A to Z Challenge 2019 and tagged A to Z challenge, Fiction, kinbaku, rope bondage, Submissive training journal.