J is for Journal

One of the things covered today was the value of keeping a journal, especially when you are in a new relationship.  It seems to be quite commonplace for a submissive to be asked to do this and to make the journal available to the Dominant which I can see is a good idea. I did wonder if it might alter what you wrote, knowing that it was to be read, but the point was made pretty soon afterwards that to think like that was not the correct approach.

The cornerstones of this sort of relationship are honesty, trust, respect and open communication.  If you are not honest about your feelings and don’t communicate them openly, then you will not have the mutual trust and respect that you need. Although it might be hard to make yourself vulnerable by opening up about things which you might rather keep to yourself, this is the only way that someone else can truly meet your needs.

I can see how this would work and can also see that it would help to eliminate many of the misunderstandings which can arise between partners due to the guesswork and assumptions made about why the other person may or may not have behaved in a particular way. Although I think I might find it hard, I also think it will feel good to be able to be clear about what I want, and to have a good understanding of what the other person’s needs are

So that was the theory but I wasn’t quite prepared for the practice. We had to hand over the journals we have been keeping. I was caught a bit off guard and realised that I would have written things differently had I known there was to be an audience. I knew it was just a journal, but it was my personal journal, comprising of my own unsolicited thoughts. I was to hand mine to Mistress Valentina. I felt I immediately embarrassed about some of the things I had written so far.  I hoped it would show my learning, but worried about some of the ways I had described the practical sessions.

My instructions were to sit still while she read it, and I watched her make some notes.  She looked up at me from time to time, one eyebrow slightly raised. She had an aura of strength, confidence and control about her, and although I knew she had a lot to teach me, I think I felt intimidated by the fact that she was a female Dominant. It seemed to highlight the differences between us in a way which made me feel vastly lacking somehow, although I knew those were my own insecurities and nothing she had done.

When she had finished reading, she asked me some questions so that she could better understand what my needs were. She went back over some of the details and also asked much more about the humiliation list. She threw open some scenarios and asked me directly what I would feel about them, waiting quietly for an answer as I wriggled and squirmed. I am sure that my reactions were probably answer enough, but she didn’t let me off the hook at all, saying that she required complete transparency and that to be evasive would lead to difficulties later on.

So I did my best as we discussed some of the desires I have kept tucked away and shared with no one, and by the end I actually felt ok. She asked about Major McGuire and what I had written about him. I couldn’t tell where that line of questioning was going, but answered as fully as I was able. She returned my journal at the end of the session and told me that her findings would form part of my further training. As soon as she said I could go, I hurried back to my room to pour over what I had actually written myself, trying to work out what might be in store for me in the coming weeks.

To catch up on other posts in this series please see April’s Submissive Training Journal
Or read last year’s letter J post for the A to Z blogging challenge: Journey, Juxtaposition and Journaling

The posts Writing and Blogging and me explain, as a submissive, the ways that writing and journaling has helped me. 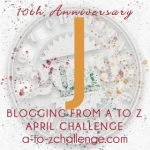 Like Loading...
Posted in A to Z Challenge 2019 and tagged A to Z challenge, Fiction, journal, journaling, Submissive training journal.