H is for Humiliation
If you had asked me before today whether or not I liked to be humiliated, I would have said no. Humiliation is the embarrassment and shame you feel when someone makes you appear stupid, or when you make a mistake, often in public, and who would want to feel like that? However, and it is a big one, when done in an erotic way, it seems that certain types of humiliation can be a turn on. I suppose this is not so strange when  you consider the fact that being humiliated leads to a feeling of being seen as ‘lesser’ in a social sense; it often means that you feel small or less significant. In other words, for many, it can make them feel more submissive.

I am a submissive. I enjoy feeling submissive and anything that makes me feel more submissive is good as far as I am concerned, so if I am with a Dominant who can humiliate me in a way which makes me feel more submissive to them, then that sounds good. What we learnt, though, it has to be humiliation that puts you in the right mindset. It has to create feelings which are negative and which pull on your insecurities but which are carefully balanced, and ultimately overridden, by an opposing feeling.

To be made to feel that you are insignificant works in a situation where ultimately you know that you are important to that person. To face the thought that you may be rejected can work when really you are confident that you are accepted. It made a lot of sense to me when I thought about it that way and it explained some of the feelings and the arousal I have experienced so far over things that also make me feel slightly uncomfortable. I think that, for me, humiliation is the prickling feeling of shame and embarrassment in situations where I feel I shouldn’t be enjoying something, but actually I am.

We are to explore these feelings further during our stay here, but as the way we all experience humiliation is extremely personal, we have been asked to highlight some of the areas we think might work. I am glad about this as they have explained how damaging this sort of play can be when it is done in the wrong way. Rather than hitting some of the positive triggers for sending you deeper into your submissive head space, it could actually trigger some of the negative feelings and experiences which would obviously be counter-productive.

What we have been asked to do it so identify four key areas that we would like to explore. After a lot of thought, mine are:

I found this really difficult to do and most of the other students had left before I had finished my list. I feel conflicted about asking for things that I am embarrassed to want, but I do see that is the point and that this is the only way that I can push my boundaries. I noticed August was one of the last finished too and I felt better when I heard his list. He is definitely more daring and extreme than I am, so I can’t wait to find out how his suggestions are put into practice. With a flush in the face, I placed my list face-down on the table, and will just have to wait to see what tomorrow brings – eek!

If you are interested in reading more about this topic then you might want to read the posts Humiliation and The Thrill of Shame.

To catch up on other posts in this series please see April’s Submissive Training Journal
Or read last year’s letter H post for the A to Z blogging challenge: Head, Humiliation and Happy Ever Afters 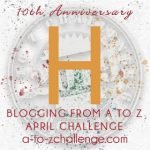