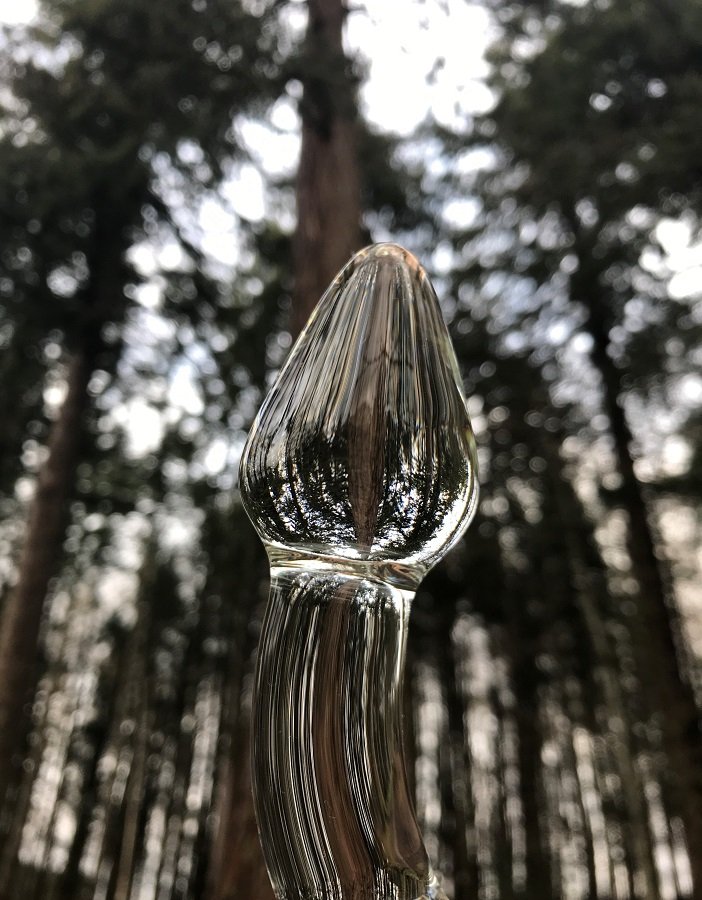 G is for Glass

I was not really sure how I felt about temperature play but I didn’t have to wonder for long as I soon discovered that the morning class was punctuated with a live demonstration. We were told to return to room 2 which was set up in the same way that it had been on Monday. A little thrill shivered through me when I thought about how I had felt when my training plug was first inserted, and my muscles clenched around it. Fortunately the training had been going well and I was not as scared of trying out the glass as I would have been this time last week.

We had been told to remove the training plugs and place them in the container beside the chair. Having done so, I positioned myself bottom up, and I waited. I had a different partner this time. It was one of the teachers who had not spoken yet so I felt a little nervous, but he soon put me at ease, whispering his introduction quietly into my ear as he rubbed my bottom a bit. He said that he was going to start with a light spanking, just to set the tone, and then he laughed. He seemed like fun, less serious than some of the others, although I wasn’t sure what they all made of the sound of the loud slaps filling the room.

The way that he spanked and then rubbed my skin after felt so good. I could feel myself relaxing completely and my breathing seemed to change. He stopped the spanking and his fingers seemed to find my clit and he stroked it gently. Was he supposed to be doing this? I giggled inside at the thought that my Dom for the day was more than a little unorthodox. I didn’t know what was happening at the other stations, of course, but I was aware that the attention I was getting was drawing little moaning noises from me.

“Hold still little one,” he said. “Although I note that you have been a good girl and stuck with your anal training programme, which should make this a whole lot easier.” I felt embarrassed that he could see my anus, which must have appeared stretched having just moved the plug so recently, but I tried not to think about that as a negative, for he certainly didn’t seem to think it so. I braced myself for the icy lube and it took a split second to translate that what I actually felt was heat. It seemed to burn in the same way as the cold had but moved much more quickly across my skin, travelling to rest at the nub of my clit.

His finger found me again, pushing some more of the hot lube inside and coating my passageway in delicious swirling strokes. I felt wanton and a sense of abandon washed over me. I should have felt embarrassed at this but I didn’t. I wanted more and more of him and of what he was doing. I didn’t care what he pushed inside me, I just wanted to feel full in a way which would quell the fast growing ache inside me. He reached down to his side and I felt something ice-cold press against my waiting hole. Without being instructed this time, I bore down, preparing to accept it. “Something a little different this time,” he whispered, and the pressure continued.

The cold chilled me and seemed to contradict the heat I felt inside, fuelling my ache. I felt a little of it disappear inside and it stopped. I twitched my muscles in response but they felt as if they hadn’t closed around the object. I felt opened and although I could feel the dildo inside me, I couldn’t quite work it out. “Ok?” he said. “Time to take a little more!” and with that I felt the pressure and a sense of the thing being twisted into me, one more notch.  “A corkscrew, Sir?” I managed to squeak, and I heard the smile in his voice as he replied, “Full marks, clever girl.” He was enjoying this, playing with me, toying with my naivety and newly found darkness, and I was enjoying that too.

He continued to turn the dildo, working it slowly into my arse until he informed me it was halfway. I felt fuller and fuller and excited by each turn. I felt so open and so altered and such a sense of wildness that I just wanted more, to take all of it. At that moment I felt a flash of heat on my clit pressing into it as he turned the thing inside me again. He had introduced a second piece of glass, circling it around my clit and setting me on fire. I gasped as the feelings overwhelmed me and from nowhere I felt an orgasm build. My legs started to quiver and I heard him say loudly, “No. Not yet. Wait until I say.” I tried to breathe slowly, calming myself, but it was almost more than I could bear.

Or read last year’s letter G post for the A to Z blogging challenge: Growth, Giving and Gentlemen 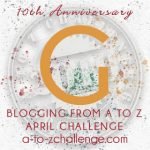