E is for Endorphins
So I learnt all about endorphins today, and I also learnt what it was that happened to me during the cane session the other day. An endorphin high – obvious now I know. I did wonder why the pain seemed to fade and go from being almost intolerable to a don’t ever stop type feeling. I had actually heard people talking about it without really understanding what it was all about, and without realising that there was a science to it. If only they had taught me this in science at school.

Endorphins are the body’s natural pain relievers. They are morphine-like chemicals which the brain releases in order to reduce sensitivity to pain, therefore increasing the pain threshold. The fact that endorphins are released in bursts means that they can be manipulated if you are the one inducing or controlling the pain, just as Dragon did to me. Once an endorphin load is released, it will take the body about ten minutes to produce another one. During this time the body should be stimulated somehow, within the current pain threshold – light bulb moment to the general tapping with the cane.

Once the body is ready, then an increase in stimulation over a five-minute period, building up to a peak to push the pain threshold, will trigger the body to release another dump of endorphins into the system. Essentially you will become high on the natural chemicals, and having a heightened sense of well-being and, hopefully, a feeling of euphoria. We also learnt about sub-drop and the need for proper aftercare: again, flashback to waking up wrapped in blankets. The drop is due to the crash of chemicals as they leave your system and you return to your normal state. Adrenaline is produced alongside the endorphins and it leaves your body more quickly that than they will, causing an immediate dip and a need for proper care.

Although this is ‘fiction’ it is always important to be properly informed. I have written a little bit about drop in the letter D post from last year, but also in post sub-drop which is on The SafeworD/s Club blog. The post Consent, Safety and Aftercare is also relevant.

Or read last year’s letter E post for the A to Z blogging challenge: Expectations, Exposure and Endorphins 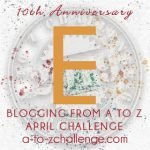 Like Loading...
Posted in A to Z Challenge 2019 and tagged A to Z challenge, aftercare, endorphins, Fiction, sub drop, Submissive training journal.