D is for Dungeon
Today, following our morning lectures, we were told that we were going out. We were organised into smaller groups so there were two others with me, but if felt odd to be leaving the school. It feels as though I have been here much longer than the few days it has been, but I suppose that is because there has been such a change in me. Sometimes I wonder how I will ever fit back into the real world again, but that is something I will not have to think about for a long time yet, so I will not give it a place in my head. What is important is what is happening now, and I am going to make the most of this.

I had forgotten about the dress code until I was handed a sheer mesh dress to put on. It was black and hugged my body, leaving nothing to the imagination. I slipped on my shoes and felt really exposed again. It felt almost like I was more naked than I had been before and I felt nervous about stepping out in public. However, I soon felt like the lucky one when May, who was also in my group, stepped into the room wearing a wide fishnet tube dress from which her nipples peeked out, and I saw August in a pair of short leather chaps. I was fast becoming good friends with these two and there was definitely a feeling of being all in it together as we walked out of the school and got into the car.

The dungeon was privately owned. We learned after that it belonged to Master C who was one of the teachers at the school, but we were shown round by his submissive, Aster. We had already learnt that, while we may be required to visit the larger public play type dungeons, it might well be that we would end up in a private dungeon. As Aster showed us into their room, I felt excited at the thought that one day, I might live in a house where there was a dungeon to use. As I entered the room, my excitement became laced with fear as I took in the equipment all around us. It felt less intimidating at the school as the rooms were set up with what was needed for practical play, but this was a clearly a much-loved and well used collection which had obviously taken years to build.

It was a room that was comfortable to be in and clearly was part of their regular lifestyle.  Aster knelt by the sofa and encouraged us to look around, and I soon succumbed to the warmth of it. When she said that nothing was off-limits we all laughed, but it was an honour to be able to learn more about the things that allowed them to explore their desires, things that we may soon be exploring ourselves. She encouraged us to touch the items, try out the furniture and ask her anything we wanted to. While we hesitated at first, not wanting to seem as if we were intruding, her easy-going nature and our natural curiosity soon meant that we were making the most of this opportunity.

All I can say is that today has been as incredible as the three days before it, although each has been so different. Being able to ask questions of someone who is so experienced as a submissive, and gaining an insight to the way the dynamic can work as a lifestyle, has only made me want this even more. I am high on the thrill of what the future may hold for me and eager to see what tomorrow brings.

Or read last year’s letter D post for the A to Z blogging challenge: Dominance, Drop and Discipline 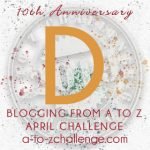 Like Loading...
Posted in A to Z Challenge 2019 and tagged A to Z challenge, body, dungeon, Fiction, married submissive, Submissive training journal.