C is for Cane
I was completely absorbed in listening to Dragon, one of our Masters, talk about the cane. When I heard my name, it took a second to assimilate the fact that he was talking to me. I suppose I am not yet completely used to my name, and in addition, they had not used any of the submissives for demonstrations before now so it was not expected. I managed a hasty, “Yes, Sir!”, getting quickly to my feet. Dragon gestured for me to join him at the front, and I felt my fear begin to rise.  We had learnt about more than the cane today so I hoped that he might be going to demonstrate one of the implements with a lesser reputation than that of the cane.

My mind was all over the place. I wasn’t sure I wanted to do this. I felt bad for having second thoughts but I wasn’t convinced that I would be able to take the pain, not here, not when my failure could be witnessed by these other people who were fast becoming my friends. My heart convulsed in my throat and I felt a chill shiver through me.
“Are you with me April?” Dragon asked, clearly aware that I was struggling.
“Yes Sir,” I managed to reply for the second time.

I felt tiny next to a man with such commanding presence. I had thought it would feel different to this and I wondered what I was doing here and whether or not I was really cut out for this. At that point he reached and cupped my chin in his hand, looking into my eyes.
“You can do this, April. I will keep you safe, you just have to trust me. You want to please me don’t you?” And in that moment I knew that I did. I really did.

Dragon helped me onto a spanking bench similar to the ones in room 2, asking me to lie so that my face looked out towards the room. I saw on the faces of the others mixed emotions, part wishing it was them up here and part glad that it wasn’t.
“I am going to demonstrate some of the techniques we have been discussing,” Dragon loudly said to the room. Please note the way that I control the cane and work with the reactions from my submissive.” Turning to me, he spoke lightly into my ear, telling me that if I stayed with him, he was sure I  would enjoy this.

As I felt his arm rise up, I tensed my muscles and waited. I waited for the whistling sound I had heard earlier in the class, but the cane made contact with my skin before that ever came. I began to relax as the cane fell in circular tapping motions across my cheeks.  Some were heavier and some were so gentle they were barely discernible. I found myself becoming focussed on the sensations and the way that the taps danced on my skin. The cane seemed to land on my cheeks in a way which caused my pelvis to tilt in response, feeding the desire to be touched, almost like an invisible line connected the two. It made me want more.

“A little harder now I think, April.” And I wanted to tell him that I wanted that too, that my body was molten metal wanting whatever he could give, but there was no request for a response and I was not sure I could make the sound come from me. In answer to my unuttered plea, the force of his fall shifted, and I felt a delicious flame lick across me. Again, this seemed to radiate downwards from the surface sting, where it touched my clit and burst out. I had not expected to feel like this. I had feared the cane and feared the pain and I felt confused at the fact that I wanted more. I didn’t want this to stop. I wanted to drift here, to lie here, to just let myself sink into the surface and melt away.

“Stay with me, April!” he whispered again into my ear.  And I wanted him. I wanted to do anything and be anything he wanted. I felt that my head was filling with the need that spilled over from my body, and then from nowhere, pain sliced my skin, dispersing like shattered glass across my cheek. A feeling of ice seemed to burst from inside me in response, dissipating when it met the heat from the fire of the sting. He reduced the pressure immediately, tapping again, in a way which rocked me gently while I waited for the next flash, when it came, a repeat of the first.

And so it continued, my first caning, as he took me higher and deeper into his world of pleasure and pain. I am not sure for how long or for how far he carried me with him, but I didn’t care about anything other than being there in that moment. I lost my sense of time and place, content to drift in this new home I had found, waking to find myself wrapped in blankets, class well and truly over. Disorientated and foggy, Dragon reassured me that I had done well and that it had been a perfect demonstration.
“I was so scared,” I said.
“I know April. But in this world, things are rarely what they seem at first glance.”

To catch up on other posts in this series please see April’s Submissive Training Journal
Or read last year’s letter C post for the A to Z blogging challenge: Control, Communication and Consent
For more about how we use the cane, you might enjoy The Tap of HisLordship’s Cane and Wednesday Canesday 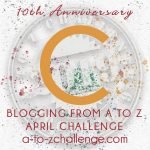