There is a lot that I find uncomfortable about my sexual thoughts and a lot that I would find distressing for others to know about. While they are fantasies in the sense that they turn me on, they are not things that I would ever want to do if that makes sense. Except that I do want to do them but I want to be made to do them. Do they count as desires? I am not sure that they do. Desires are things that you crave, or yearn for, or wish for to happen. These are like dark thoughts hidden away in the depth of my mind, that I find it hard even to acknowledge to myself. They are things that cause me to feel shame, although they excite me, and therein lies the conundrum for me. They are embarrassing at the least, and shameful at the worst.

It is strange, as I would say that I am a very open person about sex. I like to talk about it and don’t get embarrassed about that at all. It is part of my job to teach sex ed, after all, and there is nothing really that I would shy away from in that sense. But asking for things for myself, having to take responsibility for the things I want and enjoy, is hard. In that sense, I have a lot of hang ups. Not of doing the things, but of acknowledging the pleasure that I derive from them. Now I come to think about it, there is quite a long list. I have written about them before in my pursuit to push myself to explain my desire for humiliation.

Humiliation is so personal that it is hard for someone to get it right unless they really know what your hang ups are. It is about exposing your vulnerabilities and pushing you in areas where you feel uncomfortable, so it can seem a bit of a mystery to others about what it is you want, or don’t want to want, someone to do. And I think it is that not wanting to want it which is the crux for me. If it were something that I felt ok about, then I could ask. There are lots of types of play that I enjoy and can ask for, but the things which make me curl and cringe and twist inside, are things which become challenging to speak about. These things make me feel shame.

Essentially, they create a cognitive dissonance within me. Cognitive dissonance refers to a situation involving conflicting attitudes, beliefs or behaviours. This produces a feeling of mental discomfort which often leads to an alteration in one of the attitudes, beliefs or behaviours to reduce the discomfort and restore balance. People do this all of the time in life situations and it can involve changing attitudes about other people, about goals or about decisions they have made. That feeling of being uncomfortable because you are conflicted is one that we usually like to avoid, so we alter our mindset in order to do that.

When it comes to certain types of sexual play, this cognitive dissonance, and the discomfort caused by it, will lead me to become aroused.  It might seem strange to some that I would enjoy such discomfort, and this is something that I have also addressed previously when I have been writing about emotional masochism. I enjoy the emotional pain and discomfort that comes from humiliation in the same way a masochist would enjoy the physical pain and discomfort which comes from impact play. But it is the conflict created within my thoughts that leads me there.

He can add to this by what he says. By pointing out my pleasure he can force me to acknowledge and accept that I am enjoying it. I feel exposed for what I am: someone who is enjoying this thing that I see as wrong. He will take more and more control of the situation, pushing me further and becoming more intimate. He knows that I would be worried and embarrassed not to be clean, but he makes sure that I never really know. He knows, and I do not. That adds again as it leads to confliction. I want to ask but I can’t bring myself to know the truth in case it is not good. He can push me further and further by what he says, drawing on all those conflictions, making me face them, highlighting the way that I am losing control.

He will point out my pleasure and I will start to let go so my body and the physical takes over. This is the point where I will have to start to alter my attitudes and accept that I like it. If he then reintroduces the other set of beliefs then he can hold me there as I twist and turn between pleasure and pain caused by my own conflicted cognition. I become led by him as he pushes me down one path, only to pull me back to another.  As he talks about me enjoying it and wanting it, I become lost in that moment, giving in to the pleasure that I feel. By then referencing some of the ideas about shame, he has me held in that place which is embarrassing and uncomfortable but so good at the same time.

What eventually happens is that I do give in. I allow myself to lose control and to become what I am.  An anal slut. It creates a strong bond between us, as he has shown me that he knows my secrets. I have been completely exposed and humiliated by the way I have given in to something that I wasn’t comfortable with. He has made me lose control and let go of my views for that time. My desire has been stronger than my beliefs, and my need for pleasure has won over the thought of how I should respond. I have lost control of myself.

Dissonance theory suggests that if individuals act in ways that contradict their beliefs, then they typically will change their beliefs to align with their actions, and, although this happens in the moment, I return to my previous views once this is over. This leads me to form a connection with HL because he knows what my weaknesses are. He has seen inside and has got first hand experience of that other side of me. He can make me lose control, and we both know that, which adds to the power exchange in a sexual sense. He can also make me slip easily back into that submissive space by triggering the feeling of shame associated with that memory.

There are other things which would work in the same way, many of which are to do with loss of control of my body in a way which I find humiliating. Because of the nature of the way the dissonance works, for me to ask for it, even if I felt that I could, would mean that the edge was taken from it. Asking for something I want can lead to pleasure, but in this unique type of power play, I can be suspended in that place of pleasure/pain in a way that would not work if it was something that I had requested, even if I felt that I could ask for it, which I don’t.

These things remain the things I love to hate. The things I want, that I don’t want. They are made from contradictions which are as deep-rooted as the contradiction which is at the centre of erotic humiliation itself. They are about shame, about embarrassment and about discomfort, and yet they deliver such an exquisite pleasure that nothing else can match them in terms of the feelings that they produce. They give me a sense of freedom. I feel as if I am uncovered and discovered. I feel that I am accepted where I should be rejected and they overwhelm and overpower me in a way which I find hard to explain.

I would like to be able to discuss them in more detail but I can’t. My embarrassment is clear on my face when I try and the confliction is there too. I can feel my face move to an expression which is pained but where there is an embarrassed smile too. This seems to illustrate that feeling of discomfort which combines with the feeling of enjoyment in a visual way which gives me away. Sometimes even when I write about it, I can feel the telltale signs. I can feel my body heat up and I get that titillating thrill. I think that as time goes on, I will be able to be more open, but for now, these things remain mostly locked away. 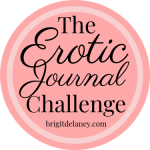 Do you now find, or have you ever found, anything distressing or uncomfortable about your sexual thoughts, fantasies, desires, or actions? Is there anything that you want or need that you have trouble asking for or are reticent to admit because it makes you blush? Have you had any experiences that have caused you embarrassment?