The Queen Bee by Hot Octopuss describes itself as ‘a powerful next-generation clitoral stimulator’. As those of you who read my blog regularly will know, clit stimulation is really my thing, so I was keen to try out a toy which claimed it could provide ‘a unique and intense experience’. I sometimes feel a bit predicatble as we tend always to reach for the wand to ensure an orgasm, so it is interesting and enjoyable to try something new and see where that goes. I have to say that I was not disappointed. 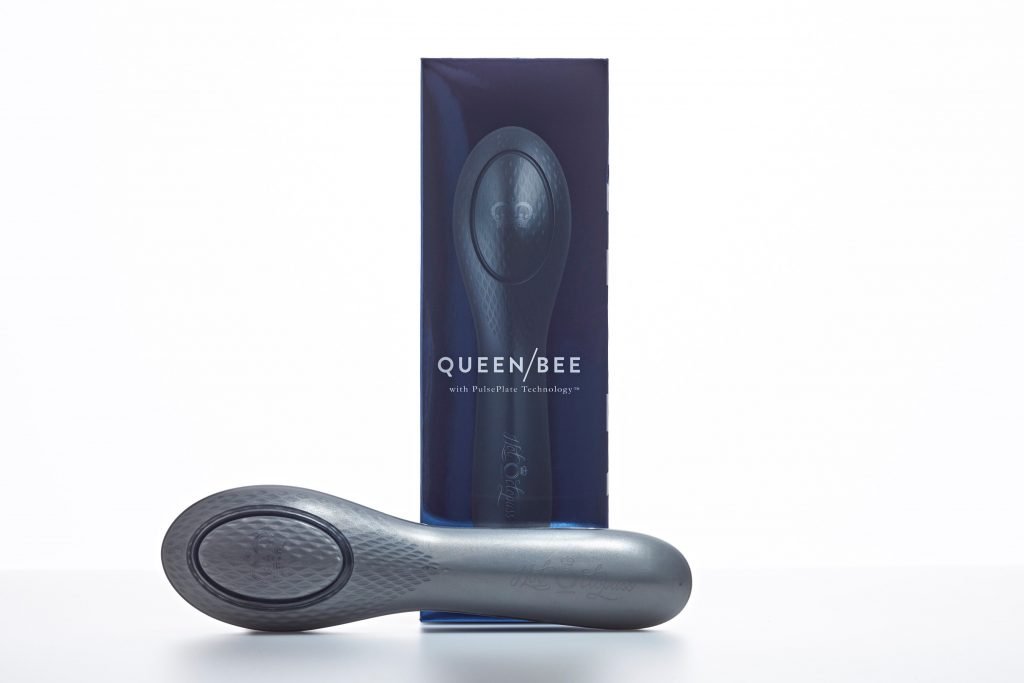 The Queen Bee looks different to toys I have had previously. The packaging is great and it comes in a handy storage bag which is understated but sleek. It is shaped like a hairbrush and is a silvery grey colour so it looks quite unobtrusive sitting on my bedside table. Always an advantage with children in and out of the bedroom to borrow my hairdryer – although fortunately no interest as yet in my new ‘brush’.

With a house full of teens, much of our fun play is focussed around hotel stays so being able to transport a toy easily is a big bonus for me. It is one of the downfalls of something like a wand which will take up much more space in an overnight bag and, with its cable and plug, be more noticeable going through airport security. This little device is far more subtle and can be slipped into a bag with quite easily. 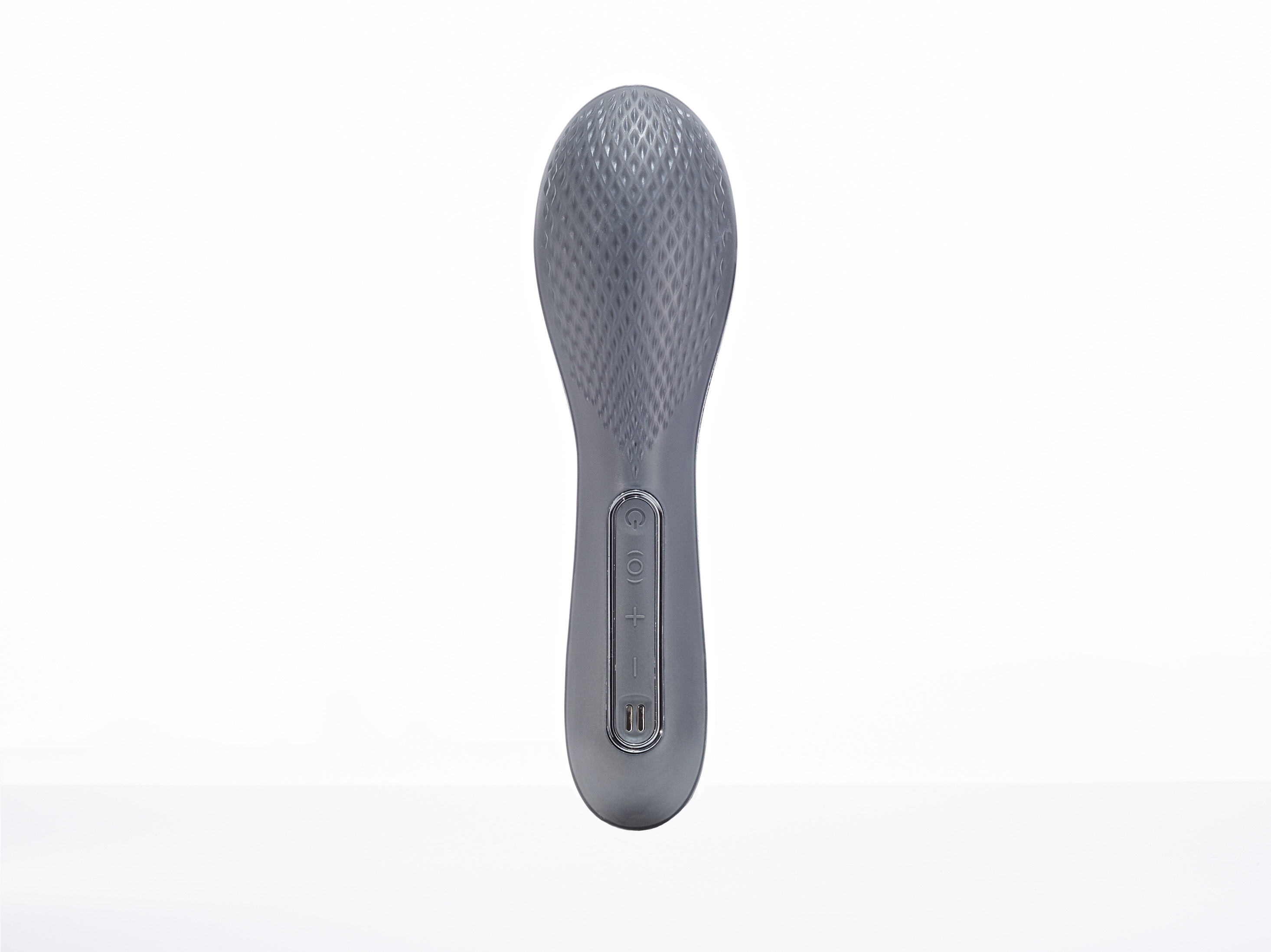 The Queen Bee is also rechargeable so that is another plus for life on the move. It is very straightforward to use – no complicated set up – and once charged it can last for hours. It has a discreet charging point which uses a USB and has a magnetic connection. The massager itself has two sides, one for a more gentle massage and one which has the more powerful pulse plate. I found this really effective as it allowed me to start with the larger plate and then move on to the more intense one.

The Queen Bee uses ‘PulsePlate Technology.‘ I have included a link to the technical details for those who want to know more but essentially it means that the vibrations are deep and rumbly rather than shallow and more buzzy. I really like this because rumbly is my thing but I do realise that others may prefer something more shrill. I don’t know if is down to the ‘piston-like system’ the Queen Bee uses but it felt different to me than other toys and the resulting orgasm seemed to come from deeper inside me than if I had used a regular clit stimulator.

I will admit that it didn’t lead to an orgasm which came fast, but was more something that could be worked up to slowly. For me this meant that when it came it was more intense and I was able to enjoy the aftershocks. Essentially it felt more like the orgasm had been drawn out of me than I had caused it myself, so it fitted with, and worked within, my submissive head space as it allowed me to get lost in it in a way which I might not be able to with some of the other toys. 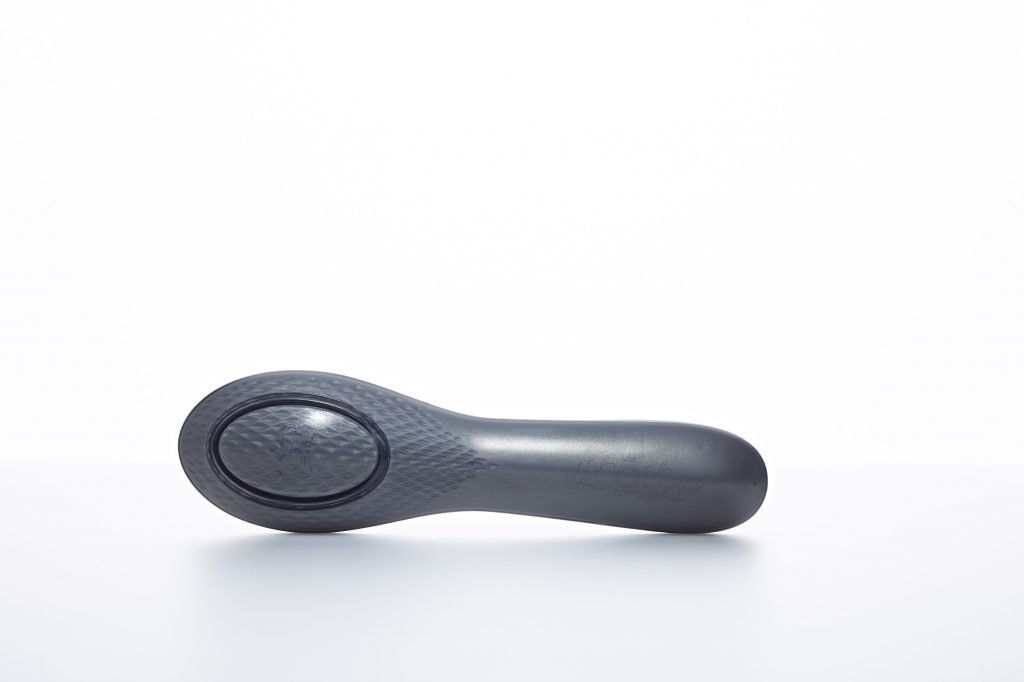 Hot Octopuss kindly gave me the Queen Bee to try in exchange for an honest review and so I wanted to use it a few times in different situations before writing about it. This post has taken me longer than I thought it would as it was quite noisy and I was concerned that it could be heard which I think needs to be acknowledged. The noise would likely not be an issue to others and it in no way put me off using it, it was more that when the kids were around, I didn’t want them to know I was using it so I feel it is worth a mention.

All in all I would say that this is a good toy if you like rumbly sensations and enjoy the slow build up to a climax. It is versatile as it has six vibration patterns, as well as a number of intensity settings, so you can easily manage the strength of the vibrations. The wide surface area of the vibrating plate means that it can be used really effectively with a partner. This is something which has been an issue with some of the more directed toys as it has been difficult for HL to know exactly how much pressure to apply and when to a small target, whilst also turning his hand to other tricks. Like the wand, the vibrating plate means that this is not an issue. 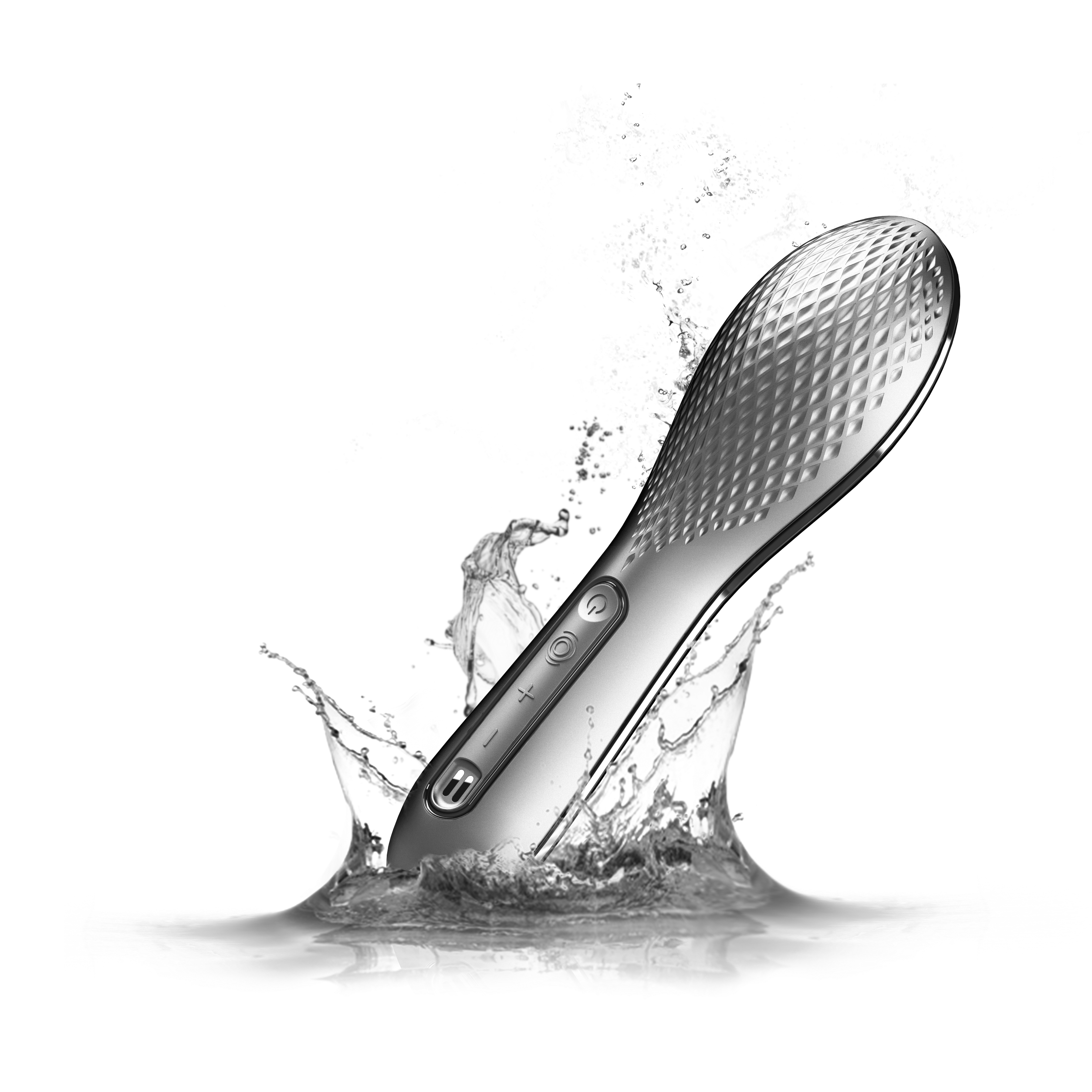 The Queen Bee is also flat enough that you can use it lying on your front and still feel comfortable which I found to be an advantage as it increased the opportunities for its use. Because of the pulse technology, I found that it worked well with a light touch rather than a firmer press but that may just be the way that my body works. And as if that wasn’t enough, it is also 100% waterproof so it can be used in the bath or even in the hot tub!

In summary I would say that the Queen Bee is versatile in the way that it can be used and unique in the type of sensation that it produces. It may not suit everyone and although it doesn’t have the intensity and therefore the speed of a wand, it was still did the job for me. If you enjoy a slow rumbly build up and an orgasm that is drawn out of you then this could be the toy for you. The noise was really the only drawback that I found and that is a common thing with many of the stimulators I have tried.

The Queen Bee retails at £99.00 so it is not a cheap toy but I always think that you get what you pay for. I first saw it at Eroticon and was impressed with the company and with their products. It looks and feels like it is a quality item and I was certainly not disappointed. Although it is a clitoral stimulator, Hot Octopuss originally developed the PulsePlate Technology for their male toys, so I know that HL is keen to try out some of those.

Just to be upfront, I have an affiliate link with Hot Octopuss, so if you buy the Queen Bee directly from them I will get a small percentage of each sale.

Click here for my other product reviews and here for the reviews on The SafeworD/s Club.