We have seen the New Year in but I have been promised some private fireworks of my own. In the bedroom he tells me to lie face down on the bed and then he sticks two of the pads from our new EStim, one to each bum cheek.
“Ready?” he says in a cheerful tone which doesn’t quite match the nervous anticipation I am feeling.
“Yes, Sir,” I reply in a voice which obviously indicates my uncertainty.
“Don’t worry. I will go slowly.”

He turns it up a little and asks if I can feel it.  Initially I can’t feel anything and I wonder if it is connected but then I start to feel a faint tingle. There are tiny little sparks on the sweet spot of each cheek like something dancing lightly on the surface of my skin. It is hardly discernible, a bit like a little fizz but he must press it again because my skin suddenly jumps and tightens; the movement spreads out, pulsing and darting into me. I respond by tilting my pelvis and pressing into the bed as I would during a spanking.

When he turns it up the next time I feel it with a jolt and let out a little noise. It isn’t painful but it is much sharper, much more intense. He tells me to relax into it, which I do.  It is lively somehow, having all that activity on my bum cheeks. He strokes my legs which distracts me and then I feel him reach under me to touch my clit. He comments how wet I am and his finger slips inside me. He tells me that he is going to turn it up again and it seems to take much longer than I want it to. I am waiting. I am a bit scared of it but want it at the same time.

And then I feel it. More than a spark now. I feel as if he is pulling my cheeks apart as the muscles start to jump involuntarily. I feel exposed and open although I know that nothing has changed. The sharp shocks continue to drive into me and my whole body feels alive with the sensation. Each time I adjust to it he turns it up again and I am losing the feeling of my place in space and time. He touches me with a gentleness and it seems to scream against the noise of the pulses that push into me.

My body seems to detach from the feeling as if my skin isn’t part of me. My bum no longer feels like it is my own. It feels altered. Alien. I have no control over it and feel that it is open to the world, my two cheeks polarised from one another by the needles of heat that are traveling though and out of them. And he touches me, fingers moving inside me, stroking my clit as I quietly become lost in what is happening.

I feel I am shouting, gasping, it all feels so loud, the taking of my body, and yet there is nothing to hear in the stillness of the night. It is the oddest of sensations but it consumes me, pushing me forward with a need for more. I want to become it, to be part of it, to own it and manage it, but I can’t. It is beyond me and beyond what I can make sense of. My world is upside down, inside out, and then he tells me that he is going to turn it up again. I moan a little I think.

“It will be ok. You can do this for me. I want to see where this can take you.”
I feel the wand start to press against me and I lift to accommodate it in that position.
“Good girl. Here we go.”
When it comes it feels more than I can take.
“Just go with it. Your body will adjust. I want you to do this.”
And I do. And it does. And the wand on my clit is pulling me one way and the stabbing sparking is charging into me and it all pushes me up and up to a point where I will have to go over.

But I seem to hang there. Not for forever, but for long enough. Caught in that space between pleasure and pain, between desire and relief, between holding on and letting go. I don’t want it to end but I can’t keep going and I feel myself collapse as it takes over and I let it happen, and I writhe and convulse but I feel like I am flowing freely, my body and my mind together but apart, and nothing makes any sense but it feels so good that I really don’t care as I let the orgasm take me.

When it is over he moves the wand away and I just about jump out of my skin as the intensity of the electricity hits me, and despite the others in the house I gasp and cry out. Afterwards I ask him how far he turned it up thinking it must have been about number 12.  He smiles and says he went all the way!

For information we bought the Flick Duo EM80-M Stimulation Multi-Pack and were using the ElectraPads which come as part of the kit. 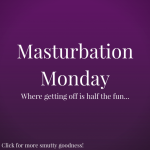