All that remained was to see who had won. Or more specifically to see who had been won by whom. It was her first time but the other girls had been before and, as they sipped their drinks, little details tumbled out like droplets.

She hoped for him. Their eyes had locked when he came over to read what she had written. She had cast them down immediately, knowing better than to be direct, but she had felt something in that fleeting moment. An interest perhaps? An indication that he liked a challenge?

The atmosphere changed as they came back in and she moved to standing, alongside the others. She had felt emboldened by their company but was suddenly engulfed by her own embarrassment. What would they think of what she had said? Had she revealed too much?

Her face burned as her name was called and she stepped forward. 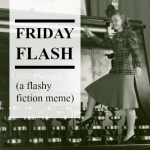