To say she was embarrassed just didn’t describe it. She was mortified – hell, she was beyond mortification. When she had discussed her fantasy first of all, she had no idea he would actually make her do it. Now here she was, sat on the chair, naked, opened and on display for anyone who wanted to look. And look they were.

He watched her from across the room. He had told her she was not to make eye contact with the men as they passed by. She was his and he would share only what he wanted of her. She was allowed to look at him of course, and she did. She allowed her eyes to lock with his whenever someone came close and it made him so hard he wanted to slash the ropes that bound her to the chair and fuck her right then.

She wondered what went through his mind. He was so calm. So controlled, his expression giving very little away apart from his desire that she remain there for him. She supposed it turned him on. The other men looking at her. They could look but could not touch. What was his was his and they all knew that it was pointless trying to negotiate otherwise.

He thought again about what it made him feel, having her on display like this. It made her even more his somehow. The ability to share and control. The ability to create the same desire and longing that he felt while still prizing and honouring what was his. He wondered briefly where this might lead, trying on for size the thought of letting someone touch her. But it felt all wrong, bringing a softness where the heat had sat previously.

She didn’t know how long she would be here. He looked like he was enjoying it as passers by stopped to comment to him on what was his. He accepted their compliments with grace and as her face burned, her body leaked out for him so that she glistened. She knew she was swollen with desire, not just because she had heard it said to him, and she longed for the release of his touch.

He could see her arousal building to the point where he might consider releasing her. She had pleased him beyond all expectation. The mere look of her sat there, legs spread wide, rope binding her by knee, ankle and wrist to the chair and her nipples pointing proudly through the gaps in the chair-back as her chin sat atop it as she gazed at him, was almost more than he could take.

She saw him stand and come towards her. Her heart quickened as he stood behind her, his hands reaching around to tweak her nipples through the bars. He pushed his body against hers and his hand dropped and he found her clit, which threatened to burst like a ripened fruit. And there, in front of anyone who cared to glance their way, she came for him within three strokes. 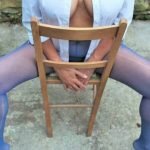