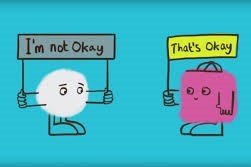 I am always interested in mental health and emotional well-being and so I wanted to write a post for the Food For Thought Friday prompt this week. I do feel a little fraudulent, however, as I am fortunate that I don’t suffer from depression, so I did hesitate about posting on this topic. It is not that I don’t have issues with mental health; I think that most people I know are affected in one way or another, but I always struggled much more with unhelpful thinking styles which lead to emotions that I managed through control, whether that was through eating, self-harm or obsessive routines. At one time the unhappiness and desperation led me to a clear suicide plan but I don’t think that I ever actually saw this as part of depression, more part of a need for everything to stop. This is something that I have told hardly anyone and I think that I still feel shame about it but this prompt, and the openness of others, had led me to begin to open up about some of the things that I had to keep buried at the time.

As someone who now supports others with their mental health at work, it is hard not to reach for the same strategies that I am encouraging for them. Through practice I have reprogrammed my own thinking and become a better friend to myself than I ever was in the past. Being able to use distraction techniques to help me through challenges until time has passed enough to let me see things differently has worked pretty well and breaking the cycle of negative thinking and catastrophising by finding perspective has also helped a lot. I know that these things are easier said and done and there is never any quick fix but being able to step outside of myself and look at things objectively is something that I am able to do and that has really made all the difference for me.

I don’t want to sound preachy and I know that everyone is different. I am not comparing my own experience to that of others and I know that what has worked for me may well not work for them in the same way. Becoming a mum changed a lot for me as it gave me a focus and a reason and really since then, the darker feelings have been easier to keep at bay. What I haven’t managed as well is to be able to give up the obsessive need for control which can push me into exhaustion. I will set unrealistic standards and then wonder why I end up tired and unwell and unable to meet the demands I have set for myself. Suffering migraines is a sign of the stress that I put myself under and in the end that forces me to slow down and stop when I am ignoring the signs from my body that I am pushing too far.

One of the biggest changes has come through meeting HisLordship. Suddenly I have someone there who will take charge and make me stop. Rather than adding to my stress as with some of the previous relationships, I am supported. Finding D/s has meant that I can have a lot of control in my life without actually being the one in control and that has been huge. The tendency is always there when I feel under pressure to seize the reigns and micro manage my way out of it, but as long as he takes control and makes sure the structure is there for me then this is something we can navigate around. I still wake up in the night and will will be the crazy lady who gets up and bakes her way through it at times, but for the most part, he can help me to keep on top of things.

Understanding yourself makes everything much easier to workaround and having someone else to you who understands you is really the icing on the cake, so I do know how lucky I am.  As a person who was never good enough, to finally be good enough makes an enormous difference. I am loved and accepted for who I am and that is a massive pick me up. On occasion I have been in conversation with subs and Doms who feel D/s is about changing the person’s personality and behaviour. I never felt comfortable about this idea as we were attracted to each other in the first place so why change? I think it caused frustration to some that HL would answer their question about what he wanted to change by telling them nothing as he liked me as I was. This led to some sarcastic remarks about missy being perfect which is clearly not the case.

We have rules and rituals and behaviours which work for us and they have changed and evolved with us as our relationship has progressed. I certainly feel like D/s has allowed me to be a better version of myself  and HisLordship has encouraged and supported that process at every step. By providing me consistency in acceptance and belief, he has allowed me to feel safe enough to explore. I have learnt to trust him and that has allowed me such a freedom from the chains of restraint that my mind put on me. I can take risks and feel less emotionally tangled by the things that life throws at me. I am more resilient and more steady in mood. I am not saying that things don’t affect me, and I would be lying if I did, but I am more adaptable, more flexible and more able just to bend and wave at the things which come along than I would have been before.

I am worrying again now that this is not a helpful or appropriate post for the prompt as the things that work for me are not really things that others would be able to do, or indeed I would be able to do without HL. I realise that managing clinical depression is a different thing entirely and what I have written about here is not meant in any way to be a response which I think could be likened to that. To feel you are at the bottom of a pit with no way out and nothing cuts through is not a place where I have been for many years and is one I hope I never go to again. The only piece of sensible advice I can offer for that is to make sure that you keep talking and try to seek help. To suggest that what works when things get on top of me is to be stripped naked, on my knees, with a cock in my mouth until I calm down and get a grip is advice which is probably quite simply inappropriate!