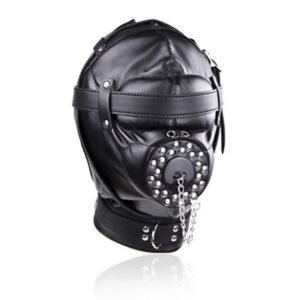 It is nice when someone you know really well can surprise you. When HisLordship told me that he had bought something new, and then added that he wondered if he might feel even more Dominant during play if he couldn’t see me, I initially wondered how he would manage a good scene if he was blindfolded. My mind ran through what it might have been that he had bought but I didn’t expect him to tell me that it was a sensory deprivation hood. I suppose this is because most of the toys that we buy have either been discussed, or they relate directly to fantasies and kinks that he has talked a lot about. Buying or using a hood is not something that we have ever really addressed, although sensory play is something that we do quite a bit of and do enjoy.

The types of sensory play that we do involves sensory deprivation as well as sensory touch and experiencing things through heightened senses. In the post A Sensory Scene I explained how beings this all together but I have also written separately about sensory deprivation and about how significant the sensory experience can be to our play.  It works for me on a lot of levels and because it works for me, indirectly it works for HL. He gets me to the place where he wants me to be and is able to observe the reactions and reponses which he is looking for and which feed his Dominance. So it is a win-win for both of us really.

Although a sensory deprivation hood is not something that we had previously agreed to try, it is not something that I would have an issue with. They sit more typically with the BDSM/fetish stereotype in terms of appearance than the other things we try but that doesn’t put me against the idea at all. Previously we have used blindfolds and masks to remove sight, headphones playing music to take away hearing, and touch has been removed through use of bondage ties. While ultimately this can produce the same physical effect, psychologically there is a difference to me. This is one whole item, slightly sinister in appearance, so it brings another element or layer to the play. I think that wearing a hood would feel much more restrictive and more confining than any of the other techniques above.

Feeling vulnerable and being confronted with my own loss of control is a turn on for me, so to allow myself to be restricted in such a way is a trigger for my own submissive head-space.  It is also exciting to be able to try something new so there are a lot of ticks in the play box for this new purchase before we even start to play in earnest with it.  The look of it falls into the area of slightly extreme for me and I am interested to see if wearing it will push me further into that little world where I become what he makes me.  Although I expect it to be quite isolating, I think that if I can allow myself to focus purely on the physical sensation, I won’t be drawn back into my own head and the jumble of thoughts which lie in wait for me there.

I suppose what I hadn’t considered until HL mentioned it, was the fact that him not being able to see me might change his responses to me. Clearly I misunderstood initially what he meant by ‘seeing me’, but there is some logic to the idea that by not seeing my face, I will be somewhat depersonalised which may alter his treatment of me too. I can’t deny that the thought of this has considerable appeal because it falls within some of the types of erotic humiliation play that I like. I won’t just have lost the other me for me, I will have left it behind for him too. I will be a body and will be the responses that he illicits in a much greater way than is usually possible.  So all in all, I am pleased that he has surprised me with this purchase and, although slightly apprehensive, I am also excited to try it out and to see where it goes.