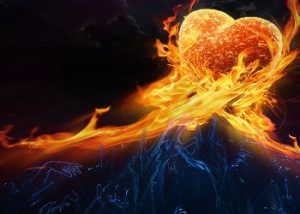 She had busied herself with the preparations for the last few days now. It was really hard to have a relationship like this, but worth it, the waiting. It was her time, the time when patience and control could finally give way to desire. She sang her songs and cleaned so that the place sparkled. She didn’t suppose he ever really noticed but she knew it was how it should be, and he always commented how nice to was, so that made it worth it for her. She had chosen the food carefully too. There was a symbolic value to everything and she had listened and learnt and read. It was important that he kept coming.

She had got better at knowing what he liked, giving more and more of herself to him each time. Their relationship was unlike any other she had ever know. It was the stuff of the romance books that she had read as a girl combined with the erotic fantasies of her adolescent years.  It was laced with magic and  excitement and lust.  It was light and dark. He treated her properly, a true gentleman but he took her to those shadowy places that she could never even vocalise to anyone. Her friends and family thought her quiet, reserved even, but he saw the real her, he knew what she really was underneath.

As the hour drew closer, she prepared the table with its decoration and she lit the candles.  She turned the lights off so that the room was dim, flickering with yellow, and she made her way to get herself ready.  She bathed and prepared so that she was as he always desired. It was so important to her to get things right. This one night was what kept her going and she never knew for sure if she would see him again. She had to do things properly as it felt that a lot would hinge on it.

As she soaked in the bath, she thought of his touch. The way he made her feel. Lost and found, small but powerful. She fed from him and he from her. Together they were what they could not be when they were apart. He said she brought him to life and with him she felt a freedom from her life that she could find no other way. She imagined he had arrived already, wondering where she was, sitting at the table alone. She felt a  thrill pass through her when it did happen; she was in the bedroom and with a sudden shift in her spirits she felt him enter the house.

The equilibrium seemed to alter in a way which she couldn’t explain. It was as if she became the air, or it became her.  Whatever it was, she knew that he was here and she knew that he was waiting for her. Her skin sparked and pricked and she no longer seemed to feel the weight of her bones. She was lighter, more alive and she burned with the fire that a year of desire brings with it. She slipped on her black heels and the scarf and she made her way through to the table.  He sat with his back to her. She could smell his musky scent as soon as she entered the room; it was intoxicating and it drew her further out of herself and closer to him.

She knew better than to greet him with words and so, in the middle of the room, she assumed the correct position, head down, bottom high, legs apart and she waited for him.  She was not sure how long she waited but when she felt her legs could hold out no longer, she felt him next to her.
“I have missed this, little one,” he whispered in her ear as his tongue teased the inside of her thigh, running up it slowly, deliciously and stopping.  The fear kept her body tense and in position and the longing washed over her. It was humiliating to be open to his scrutiny like this, but it meant that her mind left her and she became more corporeal than she had ever been with anyone else.

He continued to whisper in her ear how well she had done, and how pleased with her he was. He told her how he had thought of her and wanted her and how he had waited with patience and longing to take her again.  With a thrust of his fingers he asked who she belonged to and she cried out in response, not with words but with sound. She felt herself pushed flat to the ground and it started in earnest, his claiming of her. Arms and legs thrown wide, he bade her be still. And she was. She would not move her limbs although she twisted and bucked and let out little gasps as he played with her body.

She rose to his touch, the fire and ice of the long months coming together now in her slow and controlled undoing. These things could not be rushed and nor would either of them want them to be. And so for hours and hours he teased and pulled and pushed as she became liquid for him. She gave herself to him, crying out with her first orgasm, but he continued to torment her, knowing that she could go further. Her body pulsed with pleasure and, ripped apart with pain, began to shatter and disintegrate. Time seemed to stand still and she became nothing that she had ever known before. And still he built her up, taking her deeper and deeper into her own ecstasy.

As thinking left her she became weightless, floating in the sea of him. Her body was his, responding with wild abandon to the things he made it feel and her mind could no longer articulate on its own. She went past the point where she had nothing left to give and yet he found more and he pulled it from her deep into the night.  The greed, the hunger, the yearning seemed to culminate as she offered everything to him. Molten heat running from her and into him as she erupted at his touch. Then, hands around her throat, he finally pushed himself deep into what was left of her with a searing flash, scorching her insides.

“Tell me again,” he growled, thrusting deeper into her.
“I am Yours,” she screamed into him letting go of the last of her breath.”
“I am You,” she whispered only loud enough for him to hear.
And as he tightened his grasp, she floated on the height of her climax, rolling there over and over and over. The colour left and the light dazzled with a brightness she had never known, white and strong and blinding as her body convulsed around her core. As it started to subside, he moved and she followed climbing inside of him to rest and together they slipped through and into the darkness.

Samhain is a Gaelic festival  marking the end of the harvest and the start of the darker half of the year. Although it takes place on the 31st October, it predates the idea of Holloween and lasts from sunset on the 31st to sunrise on the 1st November. Pagan in origin, Samhain is thought to be a time when the veil between the worlds is thinner and so spirits can move more freely, in other words, the boundary  between this world and the other world can more easily be crossed.

Traditionally Samhain would involve preparing a feast and setting a place for departed ancestors who would be invited to join in the celebration. Candles would be used to draw them in letting them know they were welcome. It is a time of celebration. It marks the  end of the cycle of birth and growth and is the point of death. But from the darkness comes light so it also allows the opportunity to rest and reflect on the past and to dream of new beginnings.

Kink of the Week: Ghosts