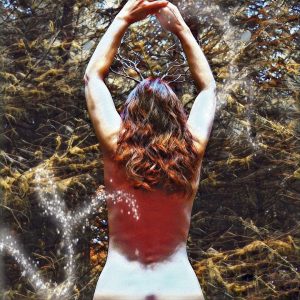 Her look warned him that although she was now of human form, there was still something of the deer about her.  Whether it was her movements, her furtive yet vulnerable stance, or the aura around about her, the feeling that he was dealing with something not quite of this world was there.  Sinking to the ground in a swift and graceful movement, she knelt suddenly before him, his dogs still on either side of her. “Please protect me Sir,” she said simply. Then raising her eyes to meet his she added, “In return, I will be yours.”

Not entirely sure what she meant by her words, Fionn vowed to himself to return the strange deer woman to his home and then consider further what to do.  He surprised himself both at his need to meet her request and at his desire to take her under his own protection. He had heard tales of the strange faerie folk and he knew he should exercise caution but something told him that it was she and not he who was in danger.  He wondered at his response. Certainly he felt guilty when he thought of how close he had come  to causing her harm during the hunt, and as he walked beside her he tried not to notice the glow of her pale skin and the rise and fall of her breasts as she walked.

Glad when they arrived at the castle, he knew that he needed time to think. He showed her to a room and bid her rest, telling her that he would fetch her the next day. Fionn hoped that things would look clearer for him by the time morning came, but as it happened things became transparent long before then. He had no sooner washed and made it to bed himself, when the strange deer woman appeared without warning in his room. She came close beside him before speaking, and finally sitting on his bed, she told him her tale, sorry as it was.

Her name was Sadhbh and she was daughter of one of the Sidh Kings. She had been stolen as a young woman by Fear Dorcha, the Dark Druid of the Sidh, for whom she refused to serve in the ways that he asked. Angry at her disobedience and humiliated at his ability to break her, he had thrown her out with a curse that she take the form of the doe, and be hunted by men until the end of her days. She had survived for three long years in the forest, until one of the servants took pity on her and told her that if she was to find Fionn, she could be free. She had searched and searched and today, by luck, Fionn had hunted her.

Fionn looked upon Sadhbh with confusion as she pleaded with him once more to keep her as his, and by doing so, to set her free.  He wanted nothing more than to rescue this fair young woman from the claws of the Dark Druid’s curse, but he knew it was more than that. He was in love with her and the dark desires that he fought so hard to push back, came flooding to the surface as he took in the beauty of her body. He must try to repress them, he thought, but as she stretched out to touch him, she drew yet more of these feelings from him.

“I will look after you and protect you, Sadhbh.” The words seemed to fall from his mouth without conscious thought. “You must stay here with me so that the terms of the curse are not reinstated and I will make sure that you are cared for and want for nothing.”
And as she thanked him and smiled up at him, he fell deeper and deeper in love with her and the magic of the Sidhe danced around about them as mortal and faerie met. As time passed, Sadhbh seemed to read his dark dreams and she whispered in his ear that she shared his thoughts, and so a year passed easily, lost in each other within the safety of the castle.

After a time there was unrest on the shores of Ireland and, as a great warrior, Fionn was called upon to help. Bidding Sadhbh farewell, he vowed to return quickly, for she was newly with child. He reminded her not to leave the castle for fear of the curse of the Dark Druid and so she stayed patiently within and waited for her husband to return. Fionn fought long and hard for seven days and seven nights and they drove the Vikings away from the shores. On the eighth day he made his way to the castle but found it quiet and empty. Tricked by the evil Fear Dorcha, his Sadhbh was gone.

Acknowledgement: The story of Fionn and the deer woman is part of Celtic folklore.