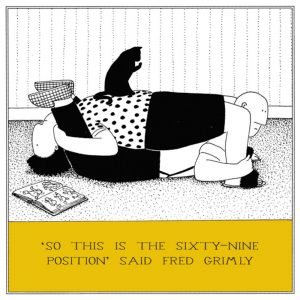 We are partial to the sixty nine. It is not a position that I was ever all that keen on prior to this current relationship, but it is our go-to now. Usually the sixty nine will form part of the play that we do in one form or another, often as foreplay or directly before penetrative sex, but it has is also become a well used standalone for us too. It offers us comfort, ease and rarely lets us down. It is one of the most intimate positions that there is and therefore it brings a closeness and is a real connector for us which is why we use it on a regular basis.

While it is a bit of a win win for sexual interaction as far as we are concerned, it has become a bit of a fall back. We don’t have the time or energy to engage in full on BDSM play as much as we would like to and although we are able to scene at home, having the time and space to do it away from home on a hotel date, makes for a more successful experience. The play that we do at home tends to be more of a one stop shop of play and although the range is full  in terms of what we could choose, it is more of a main dish served with trimmings rather than the full five courser or a tasting menu.

I am not sure that technically we have our position to demonstration standard as we are more on our sides than one of us on our back, but it works better this way for us. Both are in a position which can be held for a long time without any discomfort and it means that we can indulge in pleasure whilst also conserving energy for the more energetic activities should we so wish.  As a primer it works, but over time it has also become a thing itself. Prior to D/s, it quickly became just what we did. Lovingly named the suck and fuck, the advent of D/s and the acquisition of the wand, has renamed it the suck, fuck and buzz.