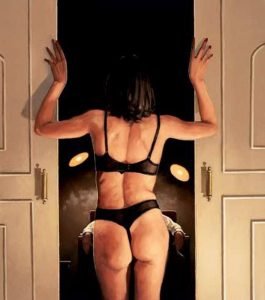 The phone he had given her rang. His voice, his tone, direct and requiring no response.

“21.47.
Black underwear.
You know where to come.
Just open the doors and wait.

She went over his words again and again. She felt she had forgotten something, missed something and her skin shrunk a little around about her.

Eyes closed she took a breath and slid the doors apart.

She was hit by the unique and intoxicating smell of the room and she flushed at the memory. She opened her eyes, looking directly into his.

He saw the flicker of fear and his cocked twitched. He smiled at her and his eyes told her of his pleasure in her so far. She exhaled slowly and took in the surroundings.

The men sat at either side of him, both dressed smartly. The oak panelling made the room dark but there were several small spotlights dotted around. The table was at one side, decorated only with their discarded napkins, no longer required as they retired to the club chairs to wait.

At one end of the room stood a large saltire of dark wood and to the right of it, a sort of leather horse, such as the type which would be found in an old gymnasium. She shuddered at the thought of how exposed she might become and what might be going to happen.

“Vieni qui, piccolo!” he said crooking his finger to signal she should join him.

Quickly she entered the room and knelt at his feet, eyes cast down.