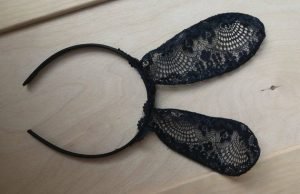 It was a gangsters and bunny-girls birthday party for one of the mums she had known for a while. She hadn’t been fussed about going but he had decided they would accept. She seemed to spend too long in the company of other women her age who did nothing but moan and complain about their husbands wanting sex and then organised things laced with the sort of innuendo which was only going to lead to disappointment.

When they spoke about sex they became so animated, oo-ing and ahh-ing over someone’s tale of a trip to Anne Summers. She always stayed pretty quiet, frustrating though that was. If they knew what she was in to she would surely be disgraced in the middle-class playground where she collected her kids from school and swapped gossip like nuggets of gold. They bored her. She assumed that underneath they were as frustrated as she would be if she were them, but wasn’t sure. She longed for a power outage one morning at 9.15 as proof of a post-schoolrun surge in energy as they all switched on their wands simultaneously.

Not that the ownership of such sex toys was likely. She smiled recalling the conversation at the PTA cheese and wine a couple of weeks ago:
“Have you heard about these vibrators which cost over £100?” one squealed.  “They are all the rage apparently. I read an article about it online…….”
And as they all squeezed around the screen of the iPhone X she had felt her face flush as the Doxy they had at home suddenly came into view. Her heart raced and she wanted to scream the truth at them but knew it was better to keep quiet. It wasn’t that he would mind if she said, but for some frustrating reason she cared what they thought and wanted to fit in.

When he said that they were going to the party and no excuses she knew better than to argue. She could suffer it surely and he had promised that they would make some fun of their own. So bunny girl she was. She had toned it down of course. The stockings she would usually wear were replaced with fishnet tights. She went with the usual heels but chose a cheeky black body rather than the corset she would have worn just for him. Fixing on her bunny ears and pinning her tail in place she picked up her glass and went downstairs to see if she met his approval.

The whistle from her gangster told her she looked good and she thanked him, grabbing her coat.
“Not so fast, bunny-girl,” he said, flipping her forward.
She thought he was going to spank her bum, but from his pocket he produced the rabbit tail and lube. Making a small incision along her seam he pushed his finger through a loop in the tights and into her opening. Before she could protest, he popped the plug in and declared that they were done.

She was mortified entering the party, aware of the plug deep in her arse with every step that she took.
“Annie! Wow you look stunning and OH-MY-GOD that is the most realistic bunny tail I have ever seen. Where did you get it?” said Sally giving it a pat.
Her insides curled and clenched as she felt herself get wetter. This was going to be a long night!