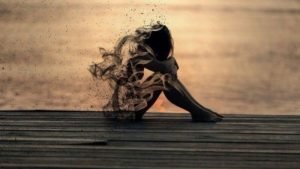 I am having some trouble maintaining my mindset at the moment. This does happen sometimes, usually when the stuff of life has de-railed us somewhat from the goal of our happily ever after. Some of these things are surmountable and other things seem to be less so. This has been a pattern over the last couple of years where we have had more significant life issues to deal with and a stream of what feels a bit like never ending bad luck. Of course we do realise that we are lucky really, and that the important things are right here in front of us, but events can pull your attention from that so that you feel you are operating in survival mode quite a bit of the time.

It is at times like this that you need to turn to your D/s. By communicating openly and seeking support and validation from each other, you can create a protective little bubble within which to exist. But a bubble is fragile and as soon as one or both of you loses focus you can find that the bubble bursts. Of course if you realise and address this you can soon get back to where you were, but sometimes, despite knowing the theory, HisLordship and I don’t put it into practice. Not because we don’t care, but because we are human, and we are tired and sometimes we just don’t.

This is often the point at which my mindset begins to drift. What I actually need is ‘more.’ More structure, more rules, more tasks. I need him to take more control from me and demand more of me, but again, that is the theory. At the beginning I go with it hoping that soon the more will come.  I try to submit more actively so that we can become more engaged again, but in the end I start to drift a bit. And I drift until I get to the point where I am not looking for more anymore, I am content with less. In fact I can become resistant to more if it is suddenly dropped upon me and I question what and why and how.

Maintaining my mindset so that I am ready, like a submissive on simmer, is what I want to do but in reality I seem to stop heating altogether so I end up as a dish served tepid – or even cold! Not very appetising or appealing. I get how that can affect Sir as it makes it hard for him to get things back where he wants them to be, and it does seem to be a cycle that we go through. At times I can go from zero to boiling with the right triggers but that seems not to be an exact science and could depend as much on the cycle of the moon as it does on pressing any particular button.

This was also an issue we found when we tried bedroom only D/s. I liked the idea, but in reality I was not always ready to submit to the level that was required. My body, yes, but often my head could still be in the classroom, or the supermarket, or even searching for a delicious pair of boots online. We found that I needed the rules and the rituals and the constant feeding of the fire to keep my embers burning.  Essentially I need to be submissive to be submissive. I always wonder at the saying, ‘absence makes the heart grows fonder,’ because for me that often isn’t the case. I am more of ‘the more I get the more I want’ type of girl and that is true of a lot of things for me, submission included.

It isn’t that I don’t want this, because I do, but I recognise my own failings and the parts of my nature that can work against me getting what I want. HisLordship will blame himself because he sees it all as his responsibility. He says that if he was meeting my needs then it would all work out, but my needs are not always constant or apparent so that is pretty impossible. They are as changeable as his are and as movable as circumstances make them so it is like constantly trying to anticipate an organic thing.

After all we can only do our best, and although we get better with practice, we remain vulnerable to outside factors, the effect of which cannot always be predicted. I do not see that either one person is ever to blame when you are in a relationship. Cause and effect are huge and in a Dominant submissive relationship a circle is formed due to the closeness between you so that what affects one, invariable has an impact on the other. We are a team and we need to work as one, power exchange or not. I want him to lead and he wants me to follow but sometimes the wanting and the doing are not the same.

Consistency is key to a lot of this and certainly where maintaining our mindsets are concerned. I will look to him all the time to lead me and where he is consistent, I follow easily. But where he isn’t, I will stop looking for the lead and when it comes I will pull against it, rather than following submissively along. This will affect that balance and the connection between us, meaning that consistency is even less likely as we both disappear into trying to manage the gap between what we want and what we are actually doing.

What has been consistent is our belief that this can work for us, and our desire to make that happen. We dip and ebb but we remain going with the flow of the dynamic. It is not something that we want to give up on but it is something that we recognise can be hard work at times. Sometimes we seem to have it sorted and it all moves along with exciting ease, but at others it can be more of a struggle and we look around to see what changed and wonder why we lost our way. This has been one of those times, but we have identified it and spoken about it and that is the start of us working together again, to keep us as the focus and at the centre of the world that we create.

Bolognaise and a Butt Plug: Challenges of a D/s Marriage