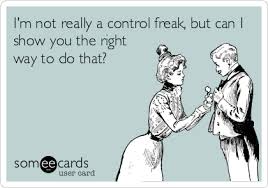 I was reading a post by Naughty Nora this morning, ‘The Surrendered Wife’, and it made me think that the strategy she was writing about, detailed in the book she had been reading, was one of the ones that I would use to help pupils to tackle anxiety. In her post, Nora explained one of the exercises that the author of the book, Laura Doyle, suggested you do: Pick a situation where you have been controlling with your husband. “Ask yourself what it was you were afraid would happen?  Was your fear realistic? What was the worst-case scenario? Did needing to control the situation justify losing intimacy with your husband?” This led me to consider the relationship between anxiety and control and the part it played in my D/s.

Obviously when working with anxiety the situation is not so much one where you have been controlling but one where your anxiety has controlled you and made you behave in a particular way – often avoidance of the situation or an extreme physical reaction to it, such as a panic attack. Usually this situation occurs because the perceived difficulty of the task outweighs our perceived ability to be able to manage it, so by breaking it down and looking at what the worst is that could happen, and helping yourself to see that you could have managed that, can help. Obviously this is a simplistic view and it would take a lot more than simply thinking it through once in this way in order to combat real anxiety, but it is about slowly learning to be able to shift your thinking so that you can manage your behaviour in a different way, and control it rather than allowing it to control you.

It struck me how similar this was to becoming submissive – that you are slowly shifting the way that you think, and ultimately the way that you behave. As with managing a situation where you are anxious, it will be a slow process, and it will take time until thinking submissively becomes completely natural I think. For me this process has definitely begun and I feel that it all comes so much more easily for me now than it did at the start. Where a situation is familiar, I manage really well but will still sometimes be thrown by new situations and/or more stressful ones. A lot of the submissive thinking has become a natural part of what I do daily, but at others I will have to do that self talk in order to really take control of my mindset and behave in the right way.

I do wonder though, if my needing to control in the past was due to feeling anxious about something, and I think that in a lot of situations it probably was. Feeling in control made me feel safe because I felt that I was prepared should anything go wrong. I knew where I was. So I do think that it was in response to my perception that actually there was something a little dangerous out there, and if I did ‘x’ then I would be in control of that. I think that relying on other people and making myself open to them, made me feel anxious because I did not trust them to take care of me, or the situation very well, so I learnt to rely on myself, to be independent and, by taking control of all the decisions in my life, to make sure that ultimately I was ok.

Having someone who I love and trust has meant that I can take those ‘risks’ that I would not have taken before. Asking what is the worst that can happen and knowing that I can manage that has really helped. Knowing that I will not be managing it on my own has been a huge part. The structure of the D/s with its continual emphasis on open communication has reinforced the fact that HisLordship is there for me, and actually is more concerned about my welfare than I am myself, so there is no reason not to rely on him to have my back. He reminds me each and every day through the things he says and the things he does that this is the case, and this means that I have been able to challenge my thoughts, rethink my responses, and alter my behaviour accordingly. This has led to much less stress and a much calmer me.

Playing to your strengths is so important and I think that having a D/s dynamic allows us both to do that. Just because you can do it all, doesn’t mean that you have to, or that you should. Being able to do the things that you like and are good at makes for a much happier existence, and if the other person in the relationship enjoys the other bits then it really works well. One of the Dominants in the chat the other night, Lion, was talking about the fact that people are attracted to other people who tend to exhibit strengths in areas where they perceive they are weaker and talking about it, most of us seemed to agree that was the case in the partnerships we have formed. It is certainly true of HisLordship and I, so I suppose that is partly why it works so well.