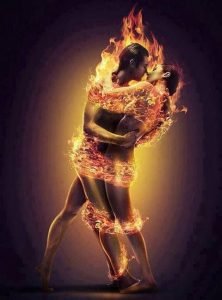 The power exchange that takes place in our D/s relationship is a key part of what keeps our dynamic alive, but it is not something which is easy to explain. I imagine that those in similar relationships can understand the significant part it plays, but for those who aren’t, or who are just starting out, I wanted to try to convey how it works. All relationships work in a circular sort of motion with the actions of one person feeding the thoughts, feelings and behaviour of the other.  This behaviour then impacts on the other person in the same way and on and on it goes. In this way a relationship can end up in a downward spiral where the negative behaviour of one party evokes a similar reaction in the other, or it could be that the positive behaviour of one triggers a positive response in return. This is the way the power exchange works in D/s, with the submission of one feeding the Dominance of the other, and vice versa.

I refer to the submission feeding the Dominance, not because that is more important, but because in our relationship that is what came first.  I wanted to submit to my husband and asked him to consider trying to build this dynamic into our relationship, so in our case my submission was the starting point.  In the same way that I felt my nature was submissive, I also believed that Sir’s was Dominant and it did not take long until my submissive behaviour brought out an increasingly Dominant response in him.  Essentially, by behaving in a submissive way, you will feed the Dominant nature of your partner.  The thoughts and feelings that they have in response to it will then lead to behaviour that is Dominant and that will then feed your submission. Within a relationship this becomes so deeply embedded that the responses and actions are all interconnected, meaning that there is not just one event triggering another but it becomes a continual cycle where that becomes the way you are together.  It is hard, therefore, to give examples; the cause and effect is not clear as there is no beginning and no end, but rather, an endless circle where you both are able to be energised through the power of the give and take.

The level of power you exchange, and the areas that control relates to, will vary from couple to couple. Obviously my experience is from the perspective of a married monogamous D/s couple so it looks quite different to the TPE type relationships that we read about before we committed to this, but it does involve an exchange of power, where one defers to the other as a matter of course. That is not to say that even though I surrender control to Sir, that he controls everything that I do. This would be both impractical and ineffective for us. What he does do is to take the lead in deciding which areas he wants to control and which he feels that I would be best to manage. For example, he will always take the lead in the bedroom, but I will usually plan the meals that we are going to eat. I work full time and obviously take control of that aspect of my life, however, if work demands that I stay late, or need to bring something home, then I would ask Sir for permission to do that.  Of course he wants me to manage my workload so he would not refuse such a request, but he may make certain demands in relation to it. Many of the responsibilities we share are agreed through discussion, with each of us playing to our strengths and interests, but the final decision always rests with him, even if that decision is to delegate something to me.

One thing that I feel is important to highlight is that the power exchange, for us, is an active thing.  As I said, it is about giving as much as about taking, and that is true for both of us. Even though he will take the lead, it does not mean that I am unable to initiate things. If that were the case it would become very one-sided which might lead to him becoming overwhelmed with the responsibility and me becoming a passive player in my own life. In order to keep the passion and fire going, I think that both of you need to be participating.  Often you are not aware of the response that your action will get, which is where the trust comes in.  At the end of the day, I do something because I think that he will like it.  I don’t do it thinking of, or expecting, a response, but it does help to fuel my mindset and hopefully his. Yesterday for example, I wore a skirt with stockings and boots but had no underwear on.  I did this because we were at home most of the day and I thought that he would like it.  I didn’t tell him I had done this but part way through the morning he realised and seemed pleased.  That made me feel good too. Late in the afternoon we were about to go out to the supermarket and I had put my coat on ready. He stopped me and told me to remove my skirt. I was pretty nervous about going out like that as I felt very exposed. He knew that I found it hard but reassured me that it was what he wanted; the connection during a simple supermarket trip then became very strong as it was a clear reminder that I was his. It also fuelled things for later on when we got back.  This is a really small example of how it works but hopefully it will help to illustrate it.

Each relationship will have different levels of what is acceptable, and being active needs to fit into that. If I instigate something it will only ever be in a way that Sir will still find submissive and that will be different for each couple. Through discussion you will get to know what fits for you, the sort of areas where he wants more control and the ones where he enjoys you taking a bit more initiative.  In a 24/7 dynamic, power will be exchanged on an emotional, physical and spiritual level, so it is important that all of these areas are fed and nurtured. You both have a responsibility to do that or the connection will not grow and your relationship will not progress.  Sometimes it may be that something gets in the way for one of you and in this instance it is important that you continue to feed the other partner through your actions. This is hard as you wonder why you should keep submitting if you are not being Dominated but things do get in the way so you need to keep going. We are all human and none of us are perfect. If you mirror negative behaviour then that will mean that things deteriorate, whereas if you can continue with your submission then that will encourage his Dominant side and vice versa.

The benefits of a relationship based on a power exchange are clear to me.  I am able to explore things that I would not normally, and do so within a safe and supported environment.  I am challenged on a daily basis which leads to growth on a personal level and, therefore, I am more fulfilled.  The trust I have in my Dominant means that we have a level of intimacy and intensity that I have never experienced before in a relationship. And the continual communication means that we are completely connected on both a physical and emotional level.  The power exchange is the fire in our dynamic – it creates the passion and feeds the desire and it keeps us tightly knitted together at the same time as moving us forward.