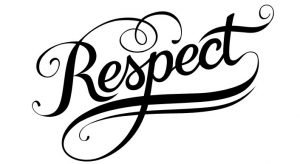 I have been thinking a lot about respect and what that means to different people. In our D/s relationship respect is extremely important. Sir requires that I am respectful to him at all times and in turn he has the greatest respect for me and values me as being part of him. This has put a real emphasis on respect for us, and in turn, for our children, as the atmosphere has changed a bit at home because of this.

I don’t think that we were ever disrespectful to each other but there is a difference between that and being actively respectful towards someone; I think that a lot of the time, people are somewhere in between as they are more motivated by seeking their own ends rather than thinking about how they are treating other people.
I am aware that in a lot of D/s relationships there is a big focus on rules.  For us there aren’t a lot of prescribed rules for me to follow – really the main thing is that I show my respect to Sir and have his needs and desires at the forefront of my mind.

That shouldn’t be hard as clearly I love him and do genuinely respect him.  If we were to try to reduce what this means down to a set of rules it would be terribly long and also incomplete.  To show your respect for someone means behaving in a way which is appropriate and fitting at the time; when you live with someone you are faced with so many different scenarios and situations on a daily basis so that it would be near impossible to list them.

To me, being respectful means that I don’t need to have a list as my respect for Sir will mean that I behave appropriately.  No one is perfect, however, and if I do slip up then I will usually be aware of it – if not then I soon will be!  We do have higher protocol times, of course, when there are some specified rules, but even then, a lot of that is down to the direction he chooses to give me at the time. I also believe that respect is a genuine feeling that comes from your appreciation of another person. How they treat you is directly relevant, as through that they will continually win your respect.

Respect is earned – it is not given just because of position.  I respect my boss at work but not because she is my boss – it is because I have a high regard for the way she treats people, because she works hard, and because she will make tough decisions. I have worked for other people for whom I have had little respect, however, I still behaved in a respectful way towards them. So when I talk about respect in our relationship I talk about a genuine respect for Sir, rather than just respectful behaviour because he has demanded it and will punish me if I don’t conduct myself properly.

So how does this look?  If there are little things that he would like me to do for him because it makes him feel good then I will respect him by doing those.  For example, he likes the duvet to be turned down ready for him when he comes into the bedroom, so I make sure that I do that.  I also set out his towel for him as I am getting mine and it seems right to me to lay it out ready for him, but he has not asked me to do that and I don’t know if he notices that I do it or not.  He likes me to kiss him as I enter and leave the house which is something that I like too. I also serve his meal first and don’t eat until he has started, although he has not asked that I do this.

He is a real gentleman, so he likes me to wait while he opens doors for me and if we are out he will order my meal, and keep me to his left hand side or away from the traffic if we are out walking.  These are some of the little things that he does which show his respect for me; he wants to take care of me and protect me and keep me safe.  The kids joke with me about how I will get in and out of the car when he isn’t there to open the door for me and I suppose that is the point – I am perfectly capable of doing these things for myself and so is he, but I respect that he wants to do them for me.

One of the biggest ways we show out respect for each other is by genuinely listening to each other.  I am always shocked at the number of families who don’t eat with each other or really talk to each other. They each seem to operate in their own space with TVs, ipads and smart phones coming between them. This is something that we try not to do.  We eat together and talk to one another.  Life can be really busy but respect is not just about the things that you do for each other, it is also about the time that you set aside and about how you use that time.

If you really respect someone then I think that you value them enough to want to put them first, to listen to them and to engage with the things that have engaged them.  All too often I think this is an easy thing to let pass by and people can end up feeling that they have not been respected because they have not been noticed or listened to.  This is not the same as being disrespectful as it is not intentional if something else has taken your attention or you are in the middle of something and not able to stop, but it is why I think that showing your respect is about more than following a set of rules.  It is about actually feeling it and wanting it.

I must admit that I have had to think carefully about my communication with Sir and I have made some changes in terms of tone of voice and the language that I use. But the biggest change has been in considering him more and putting him first as I think that I was much more selfish before. It is strange as it is almost as if the D/s has highlighted what we do and say or put it under some sort of spotlight.  Initially I had to think about it but this has just become my way of doing things and it is pretty automatic.

I think that when life is busy people can just become absorbed in what they are doing themselves and forget about how it may impact on others.  We are more attentive to each other now and definitely more in tune with one another.  The changes are small but when I look sometimes at others I can see that the gulf is actually quite wide in terms of how they might behave.  I am happy with how we do things and I can honestly say that I have never felt more respected or more loved and I hope that HisLordship would say the same.